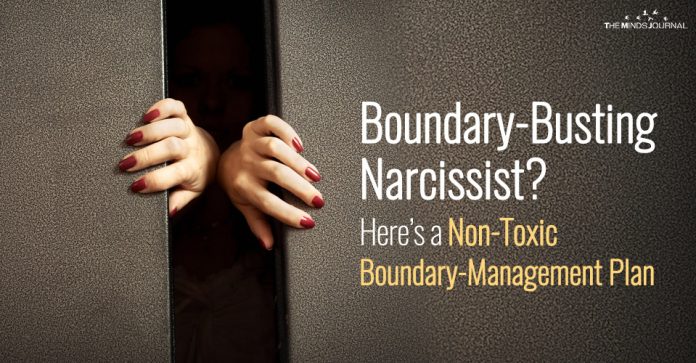 Boundary-Busting Narcissist? How to Set Boundaries With A Narcissist

Years later, Ned suddenly begins several new friendships with ladies at his office, and then within the couple’s shared social circles. This doesn’t sit well with Jane, who has consistently avoided friendships with the opposite sex since the boundary was set by Ned in the beginning.

Jane raises concerns, and Ned tells her she’s being paranoid, that she’s got nothing to worry about, but that maybe he (Ned) does – because, clearly, Jane doesn’t blindly trust him.

And you KNOW a narcissist needs his victims to blindly trust him – if they don’t, he will do everything in his power to break them until they at least APPEAR to behave as he wishes.

Instead of attempting to soothe Jane’s fears, Ned plays them up and makes Jane feel like she’s worthless and this continued manipulation and gaslighting makes her afraid of asking about any of his choices, ever, lest he unleashes a fury that only a narcissist can – the narcissistic injury and narcissistic rage one-two punch.

1. Ned the narcissist oversteps Jane’s personal boundary.
2. Jane complains, resists or refuses.
3. He pushes, pleads, prods discredits and pressures until Jane gives in and accepts the overstep.
4. She redefines her boundary and says something like, “Okay, fine, you can have female friends, but I better never find you hanging out with one alone!”
5. Hours/weeks/days later, when she catches the narcissist doing (or not doing) what she asked him (to do or not do), she obviously confronts him again, reminding him of the previously crossed and redefined boundary.
6. Rinse and repeat. The cycle goes back through the steps.

So, how do you set relationship boundaries with a narcissist?

Okay, let’s talk about relationship boundaries, shall we?

While everyone’s a little different, there are certain basic boundaries that most everyone could benefit from setting in their lives, if they haven’t already.

When someone oversteps a relationship boundary in an otherwise healthy relationship, whether it’s spoken or unspoken, it becomes a serious concern for everyone involved.

The person whose boundary has been “overstepped” is made to feel uncomfortable (or worse) and the person who did the stepping doesn’t probably feel much better, assuming he’s not a narcissist.

In most cases, the boundaries can be easily defined and for most people, they can be maintained without extreme effort.

However, some people, especially those who have a tendency to lean toward “people-pleasing,” like me, tend to have trouble enforcing boundaries with people who fail to recognize them time and again – enter the narcissist, because you know that they love people pleasers and empaths.

This, of course, leads to a clouding of our general purpose in life, which can lead to depression, anxiety and a number of other emotionally debilitating concerns – all of which can eventually lead to more serious and potentially harmful physical issues.

So what can you do if you’re stuck in a relationship with a boundary-busting narcissist?

I suggest you try the gray rock rule. 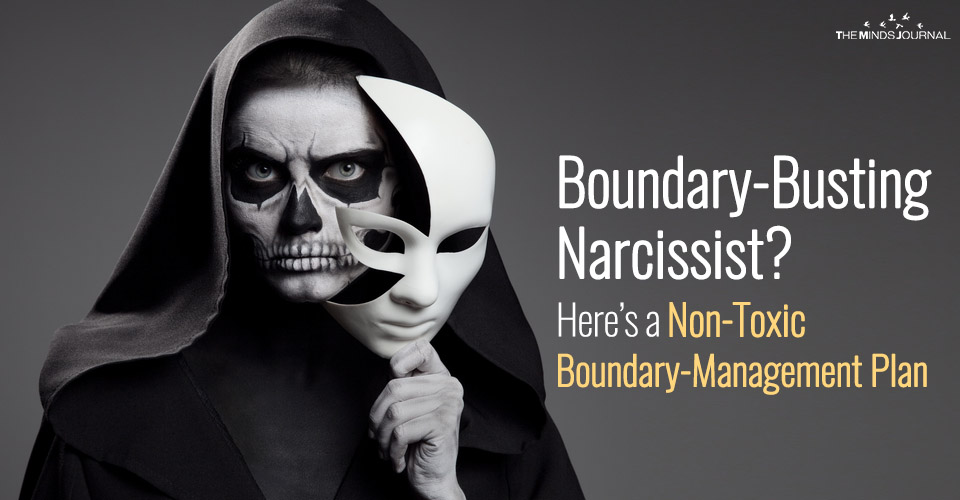 While many relationships have the capacity to become “good for you,” those with toxic narcissists are generally ill-fated. Still, the fact is that every relationship needs boundaries if you personally want to stay healthy.

Want a simple way to define what a relationship boundary looks like?

See, boundaries help to determine how much you give and receive from a relationship.

If any of your relationships are leaving you irritable and overwhelmed, reexamine your boundaries. That’s a good sign that it’s time to redefine them.

The boundaries you set in your relationships are a reflection of your ego and self-esteem.

If you have a low sense of self-worth, your boundaries are going to be unhealthy. You’ll likely be too focused on trying to please others and receive love and approval. You’ll be overextending yourself and demanding too little from the narcissist.

Angie Atkinsonhttp://queenbeeing.com/
Certified Life Coach, Author, Survivor. Discover, Understand and Overcome Narcissistic Abuse with Certified Life Coach, author and survivor Angie Atkinson, a recognized expert in narcissism in relationships and narcissistic personality disorder. As creator of the DUO Method of Healing, it's her mission to to help those who have experienced the emotional and mental devastation that comes with narcissistic abuse in these incredibly toxic relationships to (re)discover their true selves, stop the gaslighting and manipulation and move forward into their genuine desires - into a life that is exactly what they choose for themselves. As you can see when you visit the freebies page at QueenBeeing.com, Atkinson's online daily magazine, she's all about paying it forward.
-Adverts-

Without strong boundaries in place (which come from speaking our truth and saying No consistently) we are an easy target to be taken advantage of.
Read more
Hey Introvert

Are you an introvert who struggles with being social, but people don't seem to understand that? To change that, you need to be setting healthy boundaries.
Read more
wpDiscuz
0
0
Would love your thoughts, please comment.x
()
x
| Reply