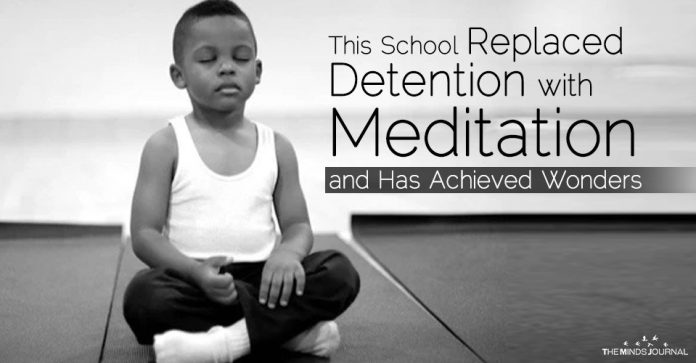 This School Replaced Detention with Meditation and Has Achieved Wonders

These techniques also help them feel more grounded. They are even encouraged to discuss their experience in the room as well as the actions that led them there.

Interestingly enough, meditation and other forms of practicing mindfulness have been put to good use across various cultures over millennia.

In recent times, even the scientific community has become intrigued by the concept and many have started researching the impact of meditation on us, both physically and mentally. All this research has come up with quite a few interesting results.

For instance, one study which worked on soldiers by teaching them mindfulness and meditation found that when they meditated regularly, they were calmer and better able to deal with volatile emotions.

Even their memories were improved. Another study proved that mindful meditation helped increase the amount of time for which a person could concentrate and improve their focus in general.

While studies on people should be viewed with some skepticism as the results aren’t uniform for everyone, on the whole, an intriguing scientific view of the various benefits of meditation has emerged. Even in the field of psychotherapy, mindful meditation has proved to have its uses.

One of the greatest gifts in moving yourself forward when you feel stuck is laughter. Here are 5 reasons why laughing until your face hurts is the best medicine.
Read more
Parenting

Multitasking might seem like an amazing idea when it comes to your kids' homework and progress in studies. But is it actually?
Read more
Coronavirus

The ongoing crisis situation is hard for many, but it is harder for some. Here's are tips on how you can support someone who is finding it difficult to keep it together in the difficult times.
Read more
wpDiscuz
0
0
Would love your thoughts, please comment.x
()
x
| Reply