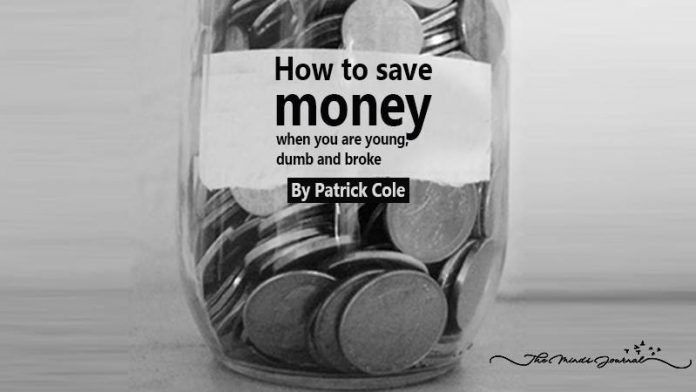 How to save money when you are young, dumb and broke

I’m a writer, so I know all about being broke. I’ve spent huge chunks of my life that way – particularly when I was young (if there’s anything that earns less money than a writer it’s a young writer). And so I know all about how it feels to be broke.

Of course, that alone won’t help you much. Sympathy doesn’t get you out of trouble.

Fortunately, I haven’t just been broke, I’ve worked my way out of it (several times as a matter of fact – another problem with being a writer is that fortune is often as fickle as the wind). In the process I’ve learned more than my fair share of tricks. Today I’m going to share a few with you.

Once you’ve got a time line and a financial target in mind, break it down to a yearly basis, a monthly basis, a weekly basis and even day by day. This is very important, as this will take your goal from being some abstract number in the future, into something you have to save every day in order to get there. And that will make each financial decision seem all the more relevant.

So, don’t have that coffee, that sandwich, or that ice cream from the corner shop. Instead make it at home and bring it in.

Can’t do that? Then consider downgrading. Do you really need that double shot cucaracha macchiato latte with syrup shaved off a penguin’s nipples? How about just having a black coffee? Is it really that much worse?

Also, you can try to use your imagination and instead of buying expensive holidays presents save some money and make it by yourself.

If you manage to shave $3 dollars a day off your spendings on stuff like this, then you’ll – you guessed it – save more than a 1000 dollars in a year.

And with that I don’t mean, ‘don’t have a negative mind set’. That’s ultimately up to you. What I mean is that if you’re trying to save money, the thing not to do is think about what you should stop doing. You see, the thing about thinking about what we should stop doing focuses our attention on it. For example, if I ask you to not think of a white polar bear, what’s the first thing that pops into your head?

So don’t think about what you won’t do as then you’ll just end up overthinking it. Instead, focus on what you’ll replace that activity with. If, for example, you love to go shopping or drinking, replace those activities with volunteering, learning an instrument, or learning how to set up your own business. Anything, really, that isn’t going to cost you as much money and is going to keep your mind off the habit that costs you a lot of money.

Another good idea, particularly if you’ve got friends with who you’ve got expensive habits, is to try and avoid them for a while. They might be toxic for you and your savings.  In this way you’ll avoid the social pressure of spending that accompanies hanging out with them. Instead, try to make new friends, preferably people who are also engaged in the activity that you’re now pursuing to keep you distracted. Then they can distract you as well!

I wish I did this… Read more »

I would not save money.… Read more »

What kind of lover would you be? Would you take us to a sacred place on the edge of where the world dissolves and we begin?
Read more
wpDiscuz
5
0
Would love your thoughts, please comment.x
()
x
| Reply