9 Rules For Living A Good Life 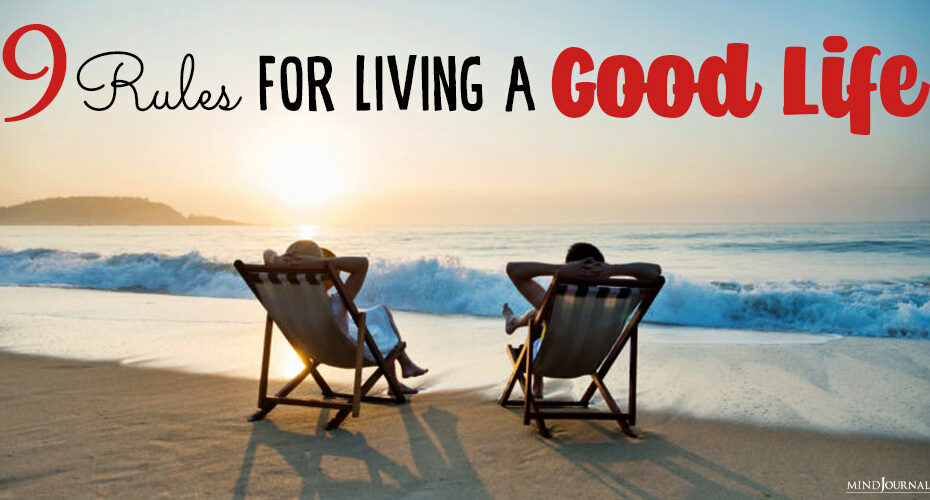 3. “Assume There Is At Least One Other Side Or Version To Every Story.”

Again, this makes sense for a reporter; but it also makes sense as we try to find ways to connect to the people we live, work, play, and otherwise associate with. In the world of social media and conviction by news reports, what this can also translate to recognizing that we are only hearing one side of any story and that there are always other sides. It also fits with some of the information we get on social media about our friends and family.

A wise young friend recently told me, “I finally figured out that there’s a ‘self’ that everybody puts on social media, and then there’s the ‘self’ that exists in real life. It’s confusing because it’s hard not to believe all of the great fun and important things people seem to be doing on social media. But even when they’re true, they’re not the whole picture. There’s always another person behind the story.”

Read 10 Important Life Lessons I Learned From My Dog

4. “Assume The Viewer Is As Smart And Caring And Good A Person As I Am.”

This one can sometimes be particularly difficult. Change “viewer” to “other person,” and ask yourself how often you think someone else is not as smart, caring, or good as you are.

Or, on the other hand, how often do you think they’re smarter, more caring, and better people than you? Most of us tend to either over-or under- estimate other people – and under-or over-estimate ourselves.

5. “Assume The Same About All People On Whom I Report.”

A client told me that he and his father had gotten into a political argument during a family dinner. “He’s so stupid and stubborn,” he said. “I can’t believe he can really believe the things he says.” Interestingly, another client had recently said the same thing about his father.

Each of these clients was smart, thoughtful men, whose fathers sounded equally smart and thoughtful. What was fascinating was that my two clients, who were on opposite sides of the political spectrum from one another, would each have probably agreed on wholeheartedly with what the other’s father was saying.

In other words, if each had heard the other’s father speak, he might well have said that he was a smart, caring, and thoughtful person. It’s important to remember that everyone has a point of view and that even when it doesn’t mesh with our own, it doesn’t mean that they are bad or stupid.

My dream is to live a good life and be loving, be close to God and be a good human being and bring peace to people – Ziggy Marley

6. “Assume Personal Lives Are A Private Matter Until A Legitimate Turn In The Story Absolutely Mandates Otherwise.”

Again, in terms of personal and work relationships, this rule reminds us that it’s important to respect one another’s boundaries. Sometimes private lives become public, either accidentally or out of necessity.

But it’s an invaluable rule to remind ourselves that, just as we’d rather not have our own personal lives exposed to the world, so too should we try to protect the personal lives of our friends, family, and colleagues, unless there is a very good reason not to do so.

7. “Carefully Separate Opinion And Analysis From Straight News Stories, And Clearly Label Everything”

In this world where the term “fake news” is often used to negate anything we don’t agree with, it’s harder than ever before to sift truth from lies. But I think Lehrer’s suggestion is still monumentally important – perhaps more than ever before. How do you know what’s the truth and what’s not?

Sometimes you don’t. But there are a few things you can do to figure it out. First, it’s useful to remember to check several different sources. If a friend tells you something bad about another friend, for instance, don’t take it as a fact, no matter how much you trust that friend.

She might have gotten parts of the story right, but she might also have mistaken or misunderstood other parts. Think about who else could give you more information, without creating a chain of gossip or false assumptions. More than one-second source is often good.

And then carefully weigh the information you’ve gathered, maybe even discussing it with a neutral third party – or if that isn’t possible, at least with people who have different perspectives on the situation and even on that particular friend.