Attention Men: The Right Type Of Chivalry For The 3 Types Of Women You Date 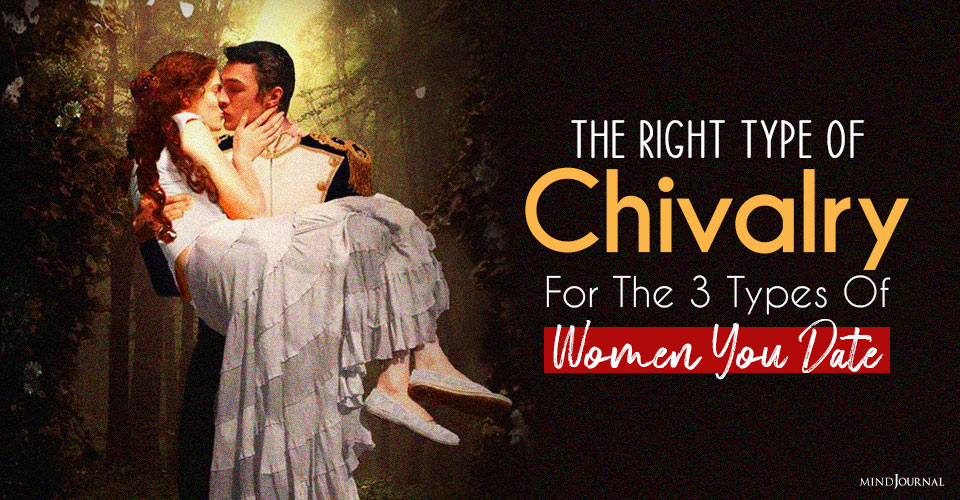 She can stand on her own two feet and that’s a good thing. She only interprets acts of chivalry as negative and condescending when those gestures are served up in a way that implies she’s helpless or as some strategy to “get something” out of her.

She considers herself your equal and dreams of a man who thinks the same of her. She actually will thank you for holding the door for her, but not because she appreciates chivalry, but because she thinks it’s the right thing to do as a civilized human being. She will most likely do the same for you (make sure to thank her when she does).

This woman is not out to get you or trying to “emasculate” you. It’s just best to let her ask for help (or first offer it) instead of imposing it on her. She appreciates chivalrous gestures that don’t trivialize her voice or take away her status as your equal partner.

So when the dinner check comes, don’t argue if she offers to pay. Instead, smile and tell her you really appreciate her offering, but that your intent is to make her feel comfortable and do something nice for her. Offer to let her pay next time if she lets you pay this once.

She is not trying to make your life hard. She is just trying to protect herself from possible heartache. She can be vulnerable, but she is not about to reveal that on the first (or second) date. She needs to trust you in order to let her guard down.

If you wish to feel like a gentleman with “The Feminist,” be her friend first. And remember: a real man is not afraid to let the woman take the lead.

Related: It Takes A Real Man To Date A Woman With A Strong Individuality

This is the woman who falls somewhere in between “The Princess” and “The Feminist.” As such, they confuse you (read: frustrate you) the most because their preferences vary.

These are women who like (even love!) being treated “like a woman,” but are often afraid of appearing needy or selfish if they allow themselves to rely on a man’s chivalry too much. The concept of a knight in shining armor is not unappealing to them. However, they know better than to “expect” one.

They are smart enough to know their own worth, yet are polite enough not to impose it on you because they recognize your worth, as well. With this particular woman, you need a gradual approach. Start with the basics: pull out her chair, hail her cab, open the door. You can never go wrong with those. Paying for dinner? Absolutely.

However, acknowledge her offer to contribute with appreciation and not disdain. While she appreciates chivalry, she abhors arrogance. Stick with small gestures, like holding her coat or pouring her wine, until you’ve gained her respect and she reveals whether she wants more.

While the “Mixed Messages Woman” seems confusing, she’s truly not. It’s just that your comfort and feeling appreciated are as important to her as you making her feel special.

What if you aren’t sure which kind of woman she is? When in doubt (or if you feel you’ve compromised the otherwise great date with a chivalrous gesture not favorably received), honesty is your best policy.

It’s perfectly fine to admit to your date that while you had the best intentions in mind, you just weren’t sure of the right gestures to make. Most women will forgive an innocent mistake and appreciate your effort.