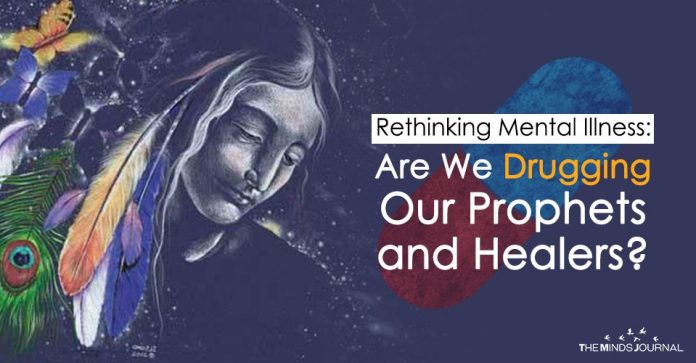 Rethinking Mental Illness: Are We Drugging Our Prophets and Healers?

Rethinking Mental Illness: Are We Drugging Our Prophets and Healers?

“How long shall they kill our prophets while we stand aside and look?”
~Bob Marley

I met Ken in my own force. Seeing a comment he’d left on a friend’s blog post, I felt I needed to know him. Looking deeper, it turned out that he had a book about battling mental illness.

Fast forward just two weeks, and I’m sitting glued to Ken’s book while visiting family, one person after another coming in every little while to comment on how far I’d read. I finished it in two days. It wasn’t short. And if it hadn’t been for mealtimes, politeness, and sleeping, I’d have read it in one.

What struck me, throughout Ken’s entire mental illness experience (which included hospitalization, hallucinations, and eventual psychiatric commitment) were three things:

1.  Everyone around him thought he was crazy and dangerous while Ken gained abilities that some people vie to access with daily meditation and ceremony

2.  Our current mental health care system hasn’t progressed since the asylum days as much as we’d like to think (physical straitjackets replaced by chemical ones)

3.  Mental illness is a dream so bad that, if you’re lucky or well-supported, you might just realize you’re dreaming and wake up in a world where everyone else is still asleep

Ken and I swapped books. He was reading The Love Mindset while I read Detour From Normal. As he consumed my book in equally record time, he became incredibly emotional in his communications. He told me he read my eulogy to Vironika Wilde and that she sounded like every woman he met in the psych wards. He told me he was fully in the love mindset when he was manic, but since he didn’t end up there purposefully, he wasn’t seen as a guru or a master. He was just another crazy guy who needed to be doped up.

He realized he wasn’t the only one, he wasn’t crazy, and he certainly didn’t need medications. He needed some sleep, some support, and some encouragement to become the healer that he’s now blossoming into.

After I consumed its satisfying ending, Ken’s story planted itself in my mind, interweaving his memories with my own and with the memories of people I’ve met.

An old friend of mine, whose art is so captivating you could stare at it for hours, was put on Ritalin for drawing in math class.

Ken weaving tales of a utopian society, reaching out to help people believing his presence could heal them, and seeing the world through a lens of perfection—court-ordered Lithium.

My first vivid hallucinations when I was 18. My boyfriend at the time looking at me like I was a psycho. And then, the incredible amounts of nightmares and flashbacks that accompanied my healing process—all of them allowing me to process through traumatic, painful events. And what if I’d thought I was a psycho? What if I took the pills I was offered? Would I still be here?

My favourite book of all time—Zen and the Art of Motorcycle Maintenance—the main character becoming obsessed with discovering the truth about reality, a truth so beautiful and ancient that few could deny it, only to be given electroshock treatment for his so-called dangerous mental illness.

A woman who reached out to me to tell me about keeping her son, clearly exhibiting symptoms of schizophrenia, away from doctors and pills—the son recovering fully a year and a half of sleepless nights later.

Sam Shelley being diagnosed with bipolar and, after engaging in frequent and dedicated meditation, coming forth symptom-free and ready to help heal the world.

With all these stories in my head, it was hard to sleep. Darkness loomed over me—the darkness of a realization too painful to digest.

Here're best books that will make your child crave for books just like they crave for screen time.
Read more
Coronavirus

The ongoing crisis situation is hard for many, but it is harder for some. Here's are tips on how you can support someone who is finding it difficult to keep it together in the difficult times.
Read more
wpDiscuz
0
0
Would love your thoughts, please comment.x
()
x
| Reply