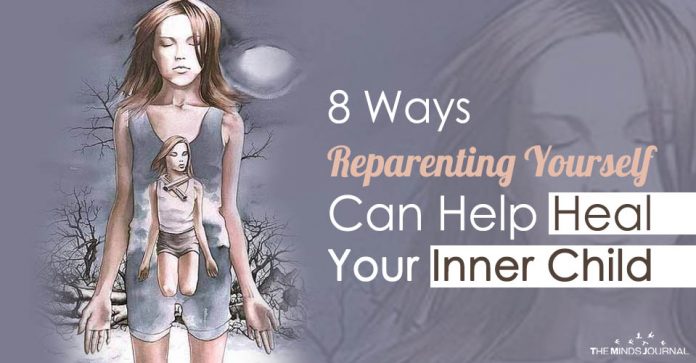 8 Ways Reparenting Yourself Can Help Heal Your Inner Child

It is true that the initial phase of role modelling in therapy was helpful, but if I lingered there, it may have turned out differently. To have your parent ego state transform is a process in itself.

It might feel clunky at the outset and even so unfamiliar that you might want to abandon the process, and let it rest “in the hands of the universe”. I would only say, give it time. I have seen it for myself that the damage takes years to develop. How then do you expect its repercussions to just fade away at the snap of a finger? Keep steadily at it and trust yourself.

Reparenting is a method of re-conditioning. The process makes way for new connections to develop and new patterns to replace the old.

Self-reparenting takes it a step further. When you make space for your inner parent to grow more present and compassionate, healing manifests in the everyday scheme of things.

In my case, I observed that I had become less critical, less worried and less judgmental. This also altered my communication with people around me, making me clearer about my own boundaries and how I would relay that to the other in interaction.

The process of coming into your own in terms of your inner parent ego state, can slowly bring in healthy distance from wounding events. The reason I use “objective” is to be able to justify that space that gets created between the memory and your present state, allowing you to witness the past without necessarily having to retraumatise yourself.

Self-reparenting helped me make connections between the past and the present with what I would call non-attachment and retrospection.

So now that you have some idea of what self-reparenting might look like, it might be useful to know what you can practice as part of the process.

4. AWAKEN THE VOICE OF CURIOSITY

With therapy giving me an understanding of the world of possibilities that can exist in a given situation, I began to look at what hurts from a place of curiosity.

At the outset, the voice was insistent and oppressive. But the more time I allowed, it turned lighter and more genuinely inquisitive.

“Do you know what would make you feel better?”

“Can you see how these words make you feel?” etc. are the kind of questions I began to use as my internal compass.