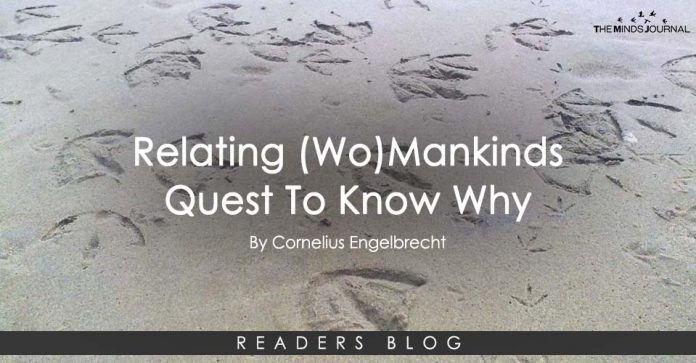 Relating (Wo)Mankinds Quest To Know Why

Our quest for knowledge about our own existence has grown exponentially in recent times and by all accounts we have gathered enough evidence about ourselves and with it a much better understanding of our brain. Sadly the same cannot be said of our mind. Not that we haven’t explored the notion of conscious awareness to wits end and back, but we haven’t quite been able to wrap our cognitive faculty to grasp how a mere three and a half pounds of matter can do what we consistently prove to be possible.

The proof however is in eating the pudding which is clearly half baked and in a shambles at present, and evidently we seem to be at an apparent loss for reason now more than ever before. In the last decade scientific research has advanced our general understanding of perception, provided clear and present evidence that we collude with nature to manifest matter, that mutual presence shared in relevance endear resonance that relate to the cocreative present we share intent and in mutual sense with another, and in harmony with athe vibrational frequency we choose to share with the rest of the manifest universe. We have research that allow us to know what’s going on inside our mind and we’ve identified all of the functional neural tracts in our brains, what they do and how they do it, but we still don’t really know why. We’ve observed a clear evidence of quantum functionality of our minds, how we are linked by neurons that transmit impulsive intent to the presence of mutual minds present, but we seemingly can’t quite concieve how it fits in with the notion of conventional cognitive theory whether at the behest of ‘alleged’ highly contentious proof of extrasensory ability, or in fear of invoking society’s scorn and igniting a ‘burn them at the stake’ mob mentality.

Yet if you can suspend your belief to concieve of a condition capable of editing memory on the fly to reflect only the facts that fit what they believe. One that not only have the potential to daze and confuse, but provide consummate proof of the Manchurian Candidate, irrefulable evidence that would treat PTSD, stem the progressive loss of cognitive ability in diseases like Altzheimers, but also provide effective treatment protocols for a slew of mental health afflictions and cognitive malaise. Would you?