4 Things That Keep Men From Committing To You 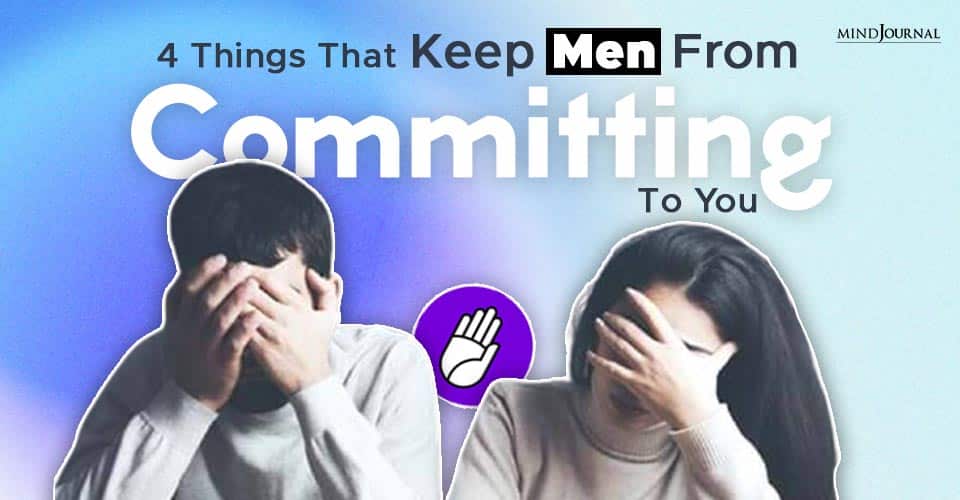 Neither of these strategies is better or worse, it’s just the way most of our minds work.

Men are trying to see if the woman fits into the picture he has for his life. He is assessing and reassessing whether or not her personality and preferences will fit into his lifestyle and goals.

If a man is more codependent, he may completely compromise his life vision and throw it aside, so he can mold himself into whatever shape he needs to be in order to be with a woman. But this spells big trouble not far ahead and creates disastrous results for both people.

When a man is allegiant to his vision for his ideal lifestyle, highest goals, and value system, he will be on the vigilant lookout for ways a woman complements that vision or conflicts with it.

If he doesn’t see the alignment, then no amount of effort will be able to change his heart. Then, a man won’t commit to you.

However, it often happens that when the connection is “good enough,” and not so far off that he feels the need to avoid it, some men may allow the relationship to drift along in a kind of limbo state – where he doesn’t feel inspired to fully commit, but he also doesn’t want to give it up because it’s fairly enjoyable and meets certain needs.

But if push comes to shove, he would let it go because deep down he knows it’s not a fit. So, men just won’t commit to you.

This is where it’s important for a woman to be strongly connected to what she needs and not shy to ask for it. If you’re enjoying a connection with a man but you’re sensing that he’s not two feet in, and that’s what you want, then it’s okay to put that forward.

Sometimes a little healthy pressure helps us suddenly see the difference between being comfortable and being committed, and saves a lot of time.

However, because men need more time to decide how committed they are, giving him more space in the early stages of dating can give him the sense of freedom he needs to feel confident in making up his mind.

Related: 5 Secret Things A Guy Needs Before He’ll Commit and start to fall in love with you

Talking about what you each want and being honest about commitment early on is great. But using an ultimatum too early, before he’s been able to gather enough information and listen to his gut, can interfere with your connection.

4. They Are Being Run By Fear

Fear factors into some aspects of the previous points – such as whether or not the two of you are a match – but it also has many more specific forms that stand on their own.

We often don’t choose paths in life, or people, because we’re afraid of the negative possible consequences and undesirable future scenarios of making that choice.

For example, a man might avoid a relationship because he’s afraid of the pain of breaking up, or the financial ruin and family complications of divorce.

He may be afraid of losing sex, and sexual novelty.

He may be afraid that he will lose his freedom and sense of self.

While some of these things are actually possible outcomes, these fears all point to a bigger problem:

He is letting his mind be dominated by fear, and he doesn’t fully trust himself.

Everything in life has risks. The relationship is certainly no exception. But we also have agency in how we conduct ourselves and mitigate those risks.

Related: Understanding Men: What They Say & What They Mean

In the same way that we can be smart with our money to avoid bankruptcy, we can also take action to ensure the success of our love.

And the threat of pain and loss are inherent to life. Any man who hasn’t embraced this fact and built up a secure tolerance against risk is essentially afraid of life itself. If he is not connected enough to his purpose, and his confidence to handle the inevitable downs of any path, he will let fear hold him back. This is the reason why men just won’t commit to you.