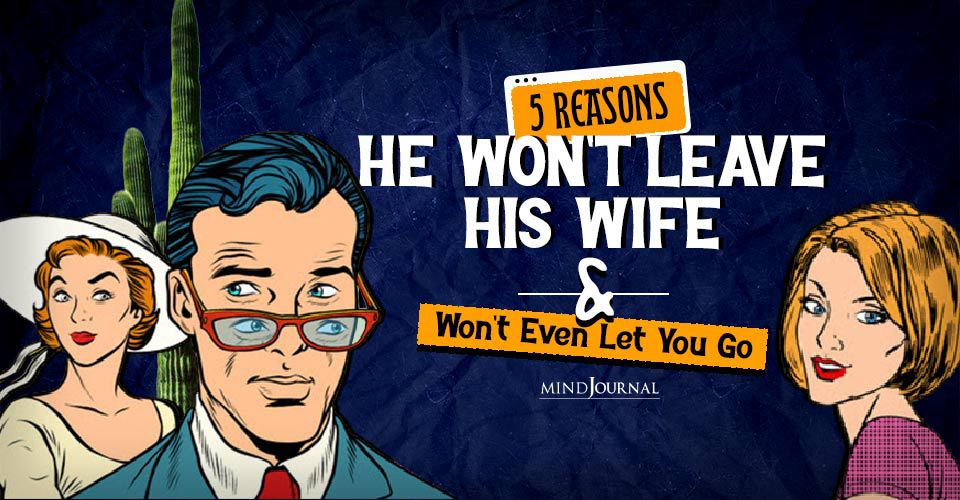 And what happened? One day she was having lunch with a friend when a friend of her friend walked by. Their first contact was electric and within a week they were spending time together. Because she had rebuilt her life after her affair, she was willing and able to find a healthy relationship, one that made her feel important and loved.

And her married man? He was still living the same life that he had before he met her, with future happiness unknown. Why would he want to let her go if her prospects of happiness made him jealous, made him feel bad about his? No, it would be easier, and selfish, for him to put his needs first and give her no chance to be happy.

4. He doesn’t want anything to change.

Nobody likes change. In my experience, guys especially don’t like change. Change messes up the order of their universe and drastic change can have a big effect.

If your married guy stays with his wife but still won’t let you go it is very likely that he is doing so so that things will remain as they are. Yes, it is tough for him to have to fight with you about his marriage but he still gets a lot out of your relationship.

If he let you go there would be a void that he would have to fill, his routines around finding time for you would shift and he might find himself preoccupied and distracted by the new order of things.

Change is scary. Any kind of change. And no one wants it if they can possibly stop it. And letting go of a relationship, of any kind, is the worst change of all!

The number one reason why your married guy stayed with his wife but won’t let you go is that you let him.

Be honest with yourself. Are you still hanging on? Do you feel like he is your soul mate and that walking away would be a big mistake? Do you still hold out hope that he will leave his wife and be with you? Do you think that you will never find anyone to love you the way he does again?

For many women who say their man ‘won’t let them go’ they have an equal share in the ‘why.’ They want out, they say, but they don’t follow through. Sure, maybe for a day or a week but then their person reaches out to them and lures them back in again. And this can happen over and over and over.

The best way to get your married man to let you go is to walk away. To let him go. For all the reasons I listed above he won’t leave you. But you can leave him.

The sooner you do the sooner you can get yourself back and start living your life! Having your married man stay with his wife but not let you go is, unfortunately, not unusual in our world.

While everyone thinks that their affair involves a love that is greater than all loves, that their person is their soulmate, in reality, we are all just people in the world, doing our best to find love and be happy. And people are fallible, no matter how much love they might feel.

As a result, letting go of someone who makes them happy, no matter how selfish the motivation, is very hard to do.

On a final note, I want you to review the list above. Every single one involves what YOU do for HIM. None of those things are because he wants to make you happy or take care of you. He keeps you around for himself. Period.

Walk away. Now. You can do it!