Workplace Bullying: 6 Reasons You Are Being Bullied At Work 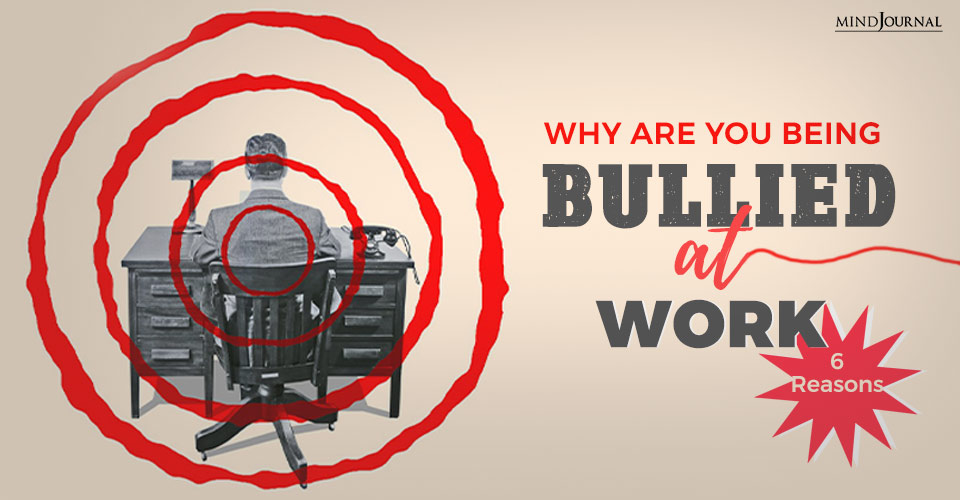 Bullies’ fragile ego, in contrast, typically relies on constant validation for a job well done. They are more interested in public praise than personal growth. Perplexed by targets’ inward confidence, bullies may become frustrated when they can’t negatively impact targets’ level of performance by withholding their admiration and approval.

Targets often possess an innate curiosity that calls them to be astute observers of their surroundings. They notice the small problems others have become accustomed to and aren’t timid about asking questions. Interested in growing their knowledge base and appreciative of diverse expertise, they reach out across departments and communities in order to expand their understandings and perspectives.

Bullies are interested in control and power. Targets’ propensity to question often shakes the status quo and calls attention to cracks bullies prefer to keep hidden. Reliant on a steep hierarchy for power, bullies become frustrated when targets make new connections bullies perceive may weaken their role as gatekeepers.

Targets tend to be altruistic, working to do the right thing even when turning a blind eye would be professionally advantageous. If wrongdoing is uncovered, targets first attempt to work through the designated organizational channels to achieve resolution. Though nonconfrontational by nature, if those attempts are ignored or rebuked, targets’ high ethical standards often charge them to become whistleblowers, despite placing themselves in harm’s way.

Bullies tend to be interested in appearances. They need the press release to be glowing and the reviews to be solid. If targets point out problems and shortcomings within the organizational walls, bullies may become frustrated by the exposure and shift to blame, shame, and cover-ups. When targets blow the whistle, they will likely be subjected to bullies’ tirades, wrath, and character assassinations with the most probable outcome of targets losing their jobs.

Related: A 3-Step Guide To Get Your Narcissistic Boss To Like You

In closing, it is important to note that it is not the targets’ fault they get bullied, for the traits they possess are exactly the ones top companies seek in the hiring process.

In contrast, the aforementioned list serves as a call to action to enact protective workplace legislation and adopt strict anti-bullying policies in order to retain top performers and cultivate work environments where employees are encouraged to be curious, motivated to be kind, and inspired to innovate solutions to problems that hamper growth and stifle community. Bullies not only damage targets they collapse organizations. Everyone wins in a bully-free workplace (except the bully of course)!