The Reason I Never Say Goodbye 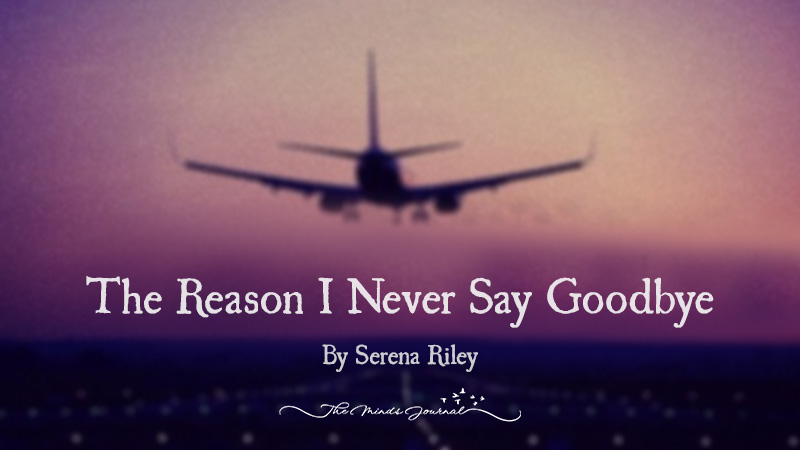 Here it is, the moment you’ve dreaded since the day you first met. You’d hoped a situation like this would never occur but sometimes we are unprepared no matter how prepared we think we are. People have to make changes in themselves, in their lives and in places we never thought would have to be changed. You’re standing in the rain and this moment couldn’t seem more bittersweet, the tears that stain your cheeks from missing him, your smile that is wishing him the best in life. This moment was never imagined, never thought out and here it is so unexpectedly.

When you were playing with his hair and caressing his back, all that you could think of was the moment you would have to say goodbye. You never told him what was running through your head because It never crossed your mind to tell him what you were really thinking, it would crush you and he wouldn’t really know what to say. Where is the good in goodbye unless you know it isn’t final? There is no justice in goodbye unless you know for sure that goodbye doesn’t mean what it usually does. You’re laughing and smiling, play fighting like children but inside you know that childish innocence is nowhere to be found. On days where it seems that you are the happiest person in the entire world, you really want to shut down and cry in his arms. The imprint of saying goodbye is tattooed in your memory forever, it torments you to know that the arms you cry in will no longer be there when you need them.

The majority of people that I have said goodbye to have caught up with me again. I am a firm believer in  the past playing a role in the present. I’ve always been the type of woman who displays both qualities in every situation. I am never left or right but simply in between and the beautiful part of it is that nobody ever fully understands the concept.  I am not a mystery or an undiscovered location, I am a human being who has no set definition. With that being said, I am not the type of person to say goodbye, especially when it isn’t my turn. In order to be fully accept the term, you have to be ready for departure. Imagine it is an hour before your flight to New York City, you’re anxious and feeling unsteady.

You’ve made your way to the airport and your suitcase is rolling behind you as you take steady steps towards  the exit to a new beginning yet you walk with one foot behind you. The place you’ve come to know is begging you to stay but you’ve put your dreams on pause for the last year which was originally only supposed to be a week. There is goodbye tapping on your front door and you couldn’t feel any more contradicted then you are already. It lurks in the places you thought had already been checked. It lingers in the air that you thought had already been purified.  Goodbye should be viewed as a departure until next time. “Good,bye.” If said in a polite manner or relaxed tone, the word can be broken up into a farewell for now conversation ending.