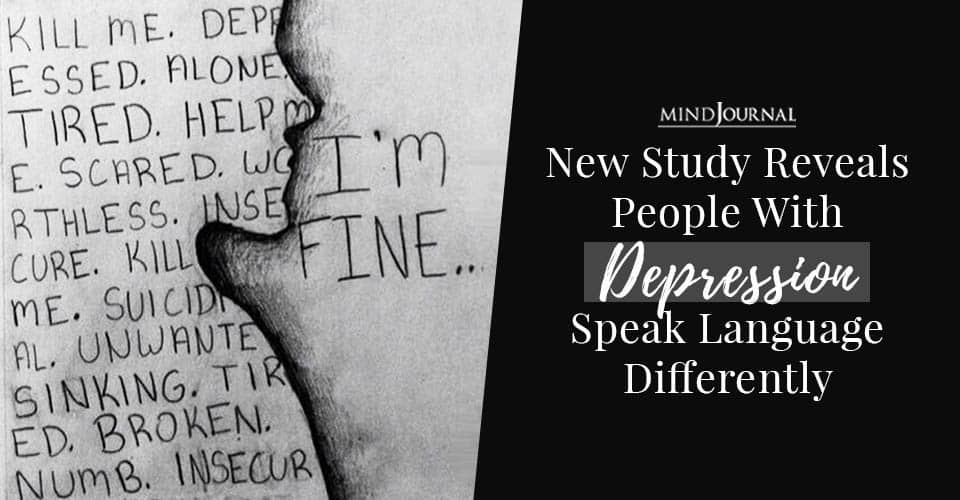 The study also focused on ruminating tendencies in internet forums. Rumination is simply repetitively going over a thought or a problem without completion.

Altogether, findings from such research and intense linguistic analysis depict clear differences in language between those with and without depressive symptoms.

According to the research, people with depression use language styles that hint at their bad mood or emotional experience. Upon monitoring the depressed individuals, usage of specific patterns of words has been found.

Most of their content convey negative emotions evident from negative adjectives and adverbs like “sad”, “lonely”, “fear” and “helpless”. The study results revealed that those experiencing suicidal ideation used fewer negative emotion words than people who were anxious or depressed.

Related: Sitting for 8 hours a day linked to a higher risk of depression

Now, these findings are crucial as they contradict the popular belief that people experiencing suicidal ideation have a greater tendency to talk about negative emotions than people with anxiety and depression but not considering suicide.

People with and without depression also show remarkable differences in speaking and writing style. Those with depression commonly use absolutists terms like, “I will fail”, “I can’t do it”, “no one loves me” and so on. These types of phrases in written and verbal communication represent cognitive distortions and indicate suicidal thoughts.

Also, the use of a first-person singular pronoun is very common in the case of people with symptoms of depression. You will hear more of “me”, “myself” and “I”  and fewer second and third-person pronouns like “they”, “their”, “them” or “he/she”.

This indicates that people with depression end up thinking only about their problems, life, and so on. You will rarely hear “we” or “they” because they are convinced that no one understands them and don’t think they can be in a good and harmonious relationship with others.

Another common symptom of depression is rumination, which turned out to be a strong indicator of depression for researchers. Ruminating is the tendency to think deeply about something repeatedly. Those who are depressed have obsessive thoughts about a particular event, situation, relationship, or loss in the past. This affects their attention and thinking skills.

Rumination is evident from repeated thoughts in their journals or personal diaries and speech where they speak about the same topic again and again. They can’t see the world out of their self-created bubble. They lack interest in hobbies, withdraw from social connections and cut off interactions with people and mostly spend indoors drowned in negative thoughts.

Consequently, they fail to come out of a complicated loop of destructive thinking or look at the brighter side of life. Since they do not engage in any new experiences, conversations or activities, they have no new information to change their perspective and way of speaking.

Related: What is EFT Tapping & How It Can Help You Heal Yourself

Does recovery from depression bring changes in written and spoken language?

Well, the above research did ask participants who feel they have recovered from depression to participate in the recovery forums and write posts. Results showed negative emotion words were used at comparable levels to control forums. However, there was an increase in positive emotion words by 70%. On the other hand, the use of absolutist words remained significantly greater than that of controls but slightly lower than in anxiety and depression forums (Al-Mosaiwi & Johnstone, 2018).

Related: How to Ask for Help With Depression: 8 Ways To Reach Out & Start Recovering