When Your Partner Loves You, But They’re Not In Love With You 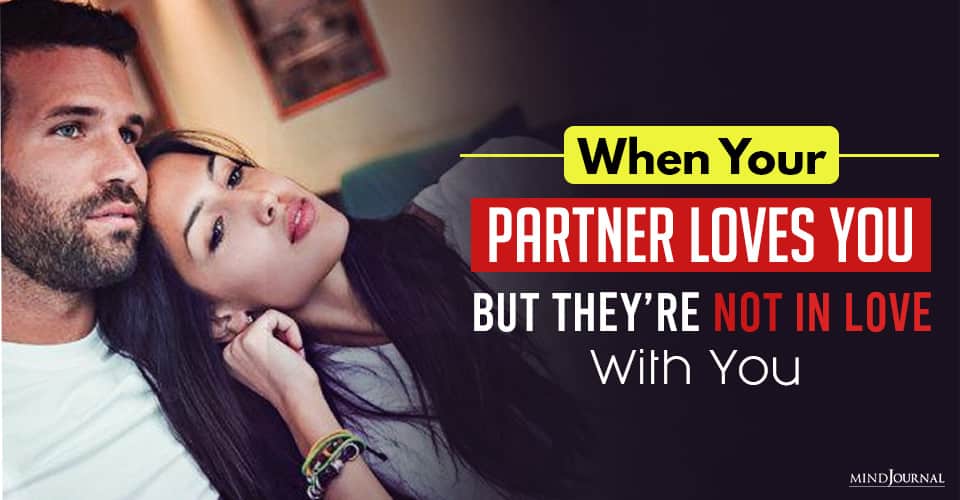 Knowing the difference between these two is crucial for anyone who seeks to deepen the quality of connection in their relationship.

Like the lyrics of another popular song say, “You gotta know when to hold ’em, and when to fold ’em.” The impulse to fold is strong when things (inevitably) get difficult in a relationship. There is an understandable tendency to justify our decision by telling ourselves that it’s just not working anymore, rather than looking at some of the deeper causes for the boredom, resentment, or discomfort.

The problem with leaving too soon is that you may be missing the very thing that you originally signed up to get in the first place. It’s possible that the love that you wanted to experience is available on the other side of the next challenge, or the one after that.

“Don’t settle for a relationship that prevents you from being yourself.” – Oprah Winfrey

Related: Why We Fall Out Of Love (And How To Stop The Cycle)

“That loving feeling” is often another term for infatuation, which literally means, “to be in a state of unreasonable and short-lived passion.” The word “fatuous” means “deluded and self-deceiving”. Infatuation is nature’s way of getting us together so that we can perpetuate the species.

We are when we are in a state of infatuation, quite literally “out of our minds” and our brains are drenched in hormones and chemicals like endorphins and oxytocin that produce irresistible sensations, feelings, and urges. Fortunately, the experience of infatuation is temporary. “Temporary,” however, can range from minutes to years. The question then has to do with how we deal with the inevitable let-down when that loving feeling is lost.

One way is to look for someone else with whom you can recreate this experience. Some people are so in love with the feeling of falling in love (another term for infatuation), that they become serial lovers, sometimes in the hopes of finding that person with whom there will be no fading effect. Some just decide that they are not the settling-down type.

Then there is that small group that knows that infatuation is impermanent and that something even better than that awaits those who are willing to explore and investigate the deeper reaches of relationship: that which lies beyond sensory pleasure.

Unfortunately, there is no generic answer to the question “How do you know when to hang in there and when to cut your losses?” It is, however a pretty safe bet that if you don’t feel that you’ve given things your very best shot, then it’s worth hanging in there a bit longer and making that extra effort.

Sometimes we think that we’re out of gas but there’s actually more in the reserve tank. Athletes experience what they refer to as a “second wind” that often occurs after the point at which they feel that they are on the edge of depletion.

“If a relationship is to evolve it must go through a series of endings.” – Lisa Moriyama

Being in a relationship, as many of us know from our own experience, is not unlike being an endurance athlete. It may require the willingness to hang in there and go past the point where you feel like quitting and giving up in order to find the hidden strength or energy needed to finish the race. The fear of hanging in there too long is often that we may be at risk of getting hurt or reactivating previous wounds that are not completely healed.

Willingly exposing ourselves to that risk helps us to cultivate the kind of resilience that enables us to expand our capacity to endure and overcome obstacles that are on the path.