Pain Of Ostracization: 5 Things To Know About Being Excluded At Work 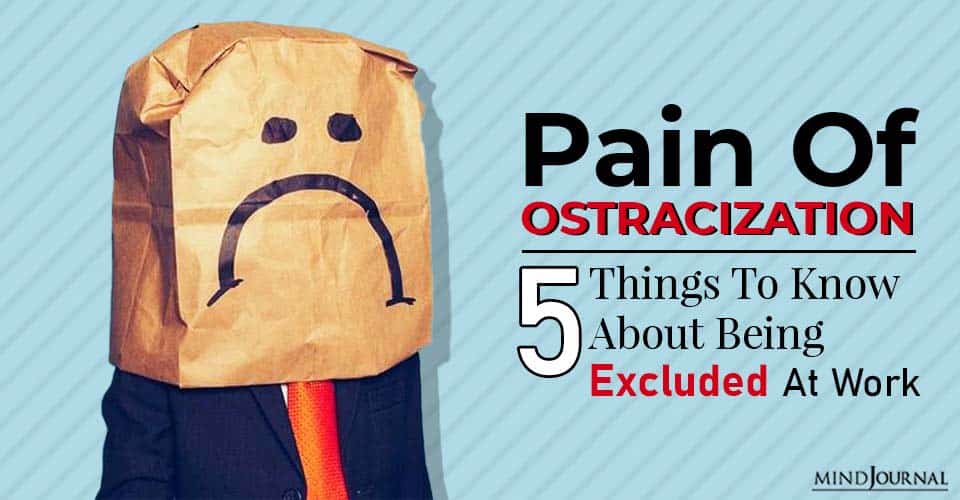 Ostracization is a common weapon for workplace bullies and one they use to make sure their target does what they tell them to do. It’s their way of controlling someone and their actions, and making sure that the bully himself never faces any consequences for his depraved actions.

Ostracization, or the exclusion of a person by an individual or group, is a common tactic of workplace bullies. It serves as a silent weapon, difficult to name, hard to call out, and detrimental to the target’s mental health and ability to meet the demands at work. Feelings of rejection are strong and quickly triggered, as demonstrated in a research study using Cyberball, a computer-generated game of ball toss in which the target is suddenly excluded from play.

The ostracization cycle, according to Kipling Williams, a Distinguished Professor of Psychology at Purdue University and foremost expert in the field, follows a three-stage process referred to as the Need Threat Temporal Model.

It begins with the Reflexive stage in which the target’s fundamental needs of belonging, self-esteem, control, and a meaningful existence are threatened.

The Reflective or coping stage is next, where the target assesses the damage and may attempt to re-establish the connection by complying with group norms or become angered by the abuse and seek retaliation.

If the exclusion is prolonged, the target enters the Resignation stage, where he often experiences feelings of unworthiness, hopelessness, and depression.

#2. Why Do Workplace Bullies Use Ostracization As A Weapon?

Hard to prove, easy to join in on, and devastating in impact, ostracization is a favorite tactic of workplace aggressors. According to Williams, “being excluded or ostracized is an invisible form of bullying that doesn’t leave bruises, and therefore we often underestimate its impact.”

Social exclusion attacks the target’s sense of belonging, breaks down her social network, and prevents the flow of information necessary for successfully completing projects and tasks. To make it even more appealing to workplace bully, research shows that ostracization is contagious.

The fear of social exclusion is so salient, most bystanders will adopt the behavior of the aggressor, ensuring their “in-group” membership, as opposed to risking possible retaliation for questioning group norms. Once a target is identified for exclusion, mass mobbing may follow, intensifying the pain and scope of the ostracization.

#3. Why Does Ostracization Hurt So Much?

According to Robert Sapolsky, a neuroendocrinologist at Stanford University and recipient of the MacArthur Foundation Genius Grant, the pain of ostracization appears to be evolutionary. We are social creatures by nature. In the wild, belonging to a group is necessary for survival, and traveling alone leaves us susceptible to injury and death. The pain of ostracization may be an evolutionary tool to warn us we are in danger.

Victims of ostracization often say the exclusion hurts, an apt description it turns out according to Eisenberger, Lieberman, and Williams whose research shows that isolation activates the dorsal anterior cingulate and the anterior insula, the same areas of the brain that light up as a result of physical pain. They surmise “social pain is analogous in its neurocognitive function to physical pain, alerting us when we have sustained injury to our social connections, allowing restorative measures to be taken.”

#4. How Does Ostracization Promote Conformity, Stifle Creativity, And Discourage Whistleblowing?

Employees’ attitudes and actions help to form the prevailing workplace culture and create rules for belonging. Parks and Stone found that cultures with strict norms, who discourage dissent, will sometimes outcast individuals who are high-performing and overly altruistic in action.

They hypothesize such employees raise the bar too high, surpassing work production and creativity norms, and make some colleagues feel poorly about themselves for not being better stewards of others. To reestablish group membership, the high performer is pressured to play small or resign, perpetuating a stifling and sometimes toxic workplace culture.

Cialdini (2005), a professor at Arizona State University, found we often underestimate the intense influence of social dynamics. When poor behavior is pervasive in an organization, in regards to professional interactions and ethical decision-making, employees are more likely to conform. Who risks becoming an outcast in the name of speaking out against injustice?