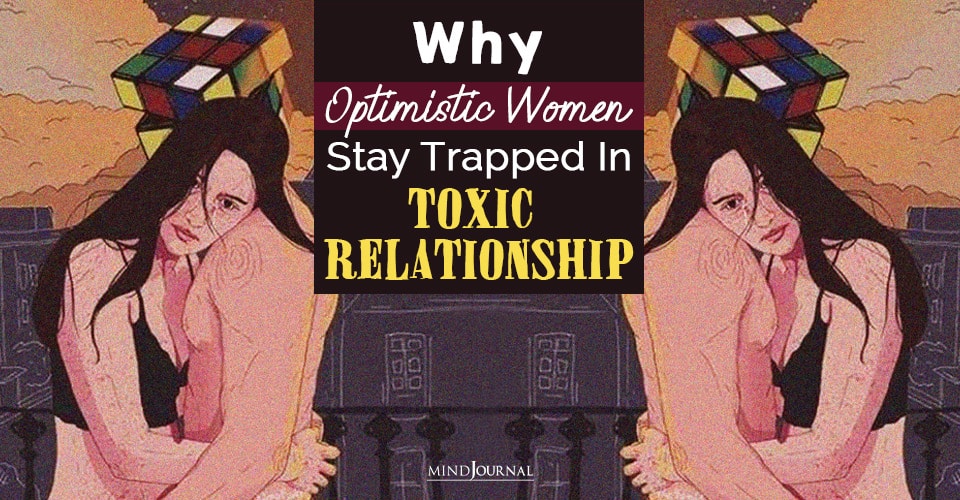 They will keep believing that they need to keep holding on to the toxic relationship a little bit longer. Unfortunately, that belief will last for years to come

Sarah Ramsey writes “Optimistic women don’t give up easily and stick it out when things are tough. They are self-motivated and willing to keep getting up even when life (or their relationship) knocks them down.” These women believe that life and relationships get better with time.

She adds “Optimistic women find the silver lining no matter how dark things get. They stay in unhealthy relationships despite being treated in ways that seem inconceivable to others.”

The fact is these women need to stop being optimistic and start being realistic. Too much optimism can in fact be detrimental to your relationship. A 2013 study published in the Journal of Personality and Social Psychology revealed that being too optimistic in a relationship can lead to unrealistic expectations and ineffective coping skills for relationship problems.

The research showed that although optimism is seen as an asset and encourages helpful coping efforts in life and relationships, certain types of optimism “can be a liability, as expecting the best may prevent individuals from taking proactive steps when confronted with difficulties.” It adds that the “results suggest that whereas global forms of optimism may represent a relationship asset, specific forms of optimism can place couples at risk for marital deterioration.”

To put it simply, when optimistic women fail to acknowledge the problems in their relationships and falsely believe that everything will be great, when in fact they are not, then it can easily create distance between partners. This can be especially true when one partner is more realistic than the other.

Although it doesn’t mean that you have to be a pessimist to enjoy a healthy relationship, it can be helpful if you are a bit more realistic and grounded.

Co-author of the 2013 study, psychologist Lisa Neff at the University of Texas, says “In my study, no one scored low enough to be considered pessimistic, and I would not expect that to be good for relationships. It is great to be optimistic, but keep it at a more realistic level.” And perhaps this is why optimistic women tend to find themselves in toxic relationships more than others.

Is being an optimist such a bad thing?

The problem here is not with being an optimist. It’s about not being realistic enough and having inflated expectations. “As a rosy picture of the future, optimism can allow you to remain blissfully ignorant of what’s actually going on around you. This can really cause problems,” writes marriage consultant, ADHD expert and author Melissa Orlov in a Psychology Today article.

Optimistic women have this inner belief that if they put in enough effort and change themselves, they will be able to make the unhealthy relationship better. As they try too hard to work on themselves, their toxic partners take advantage of this and make them believe that they are the problem in the relationship.

Thus these women start believing the lie that they are the ones who need to change. As she keeps trying desperately to work on herself, she will fail to realize that their toxic partner wants them to change so that the “the toxic person won’t have to change,” explains relationship expert Sarah K Ramsey.

She adds “Her optimism blinds her to what is happening and the toxic partner’s mask, as well as their intermittent reward system, prevent her from seeing the truth: she is in a game that she doesn’t realize she is playing. A game in which her strengths are being used against her. A game in which optimism is actually a weakness.”