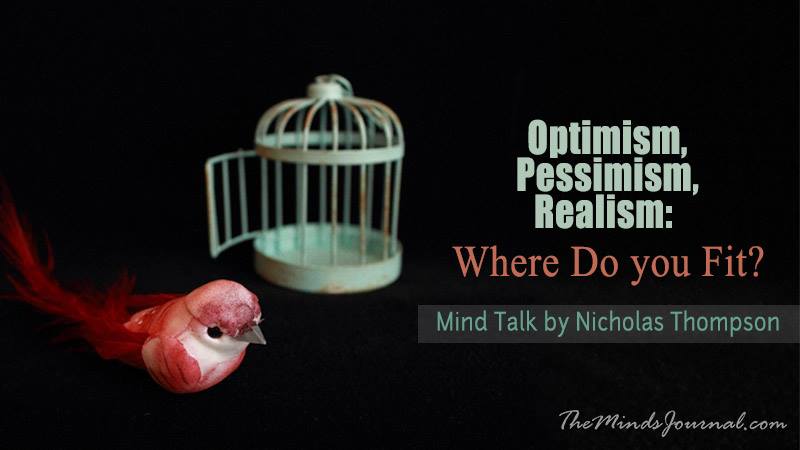 Optimism, Pessimism, Realism: Where Do you Fit? – Mind Talk

Three men are seated in a cage that is locked, with the key a short way off. Optimism is thinking and scheming about a possible way out of the cage in one corner, parading around the fact of escape; Pessimism is moping in another corner, mumbling that trying to escape is futile. Realism, however, isn’t crying or planning, but reaching through the bars in an attempt to get the key. He wastes no time in escaping and needs no emotional push to get him to act. They eventually do escape, with Realism accepting his accolades, Optimism telling all how he knew the outcome would be good and Pessimism wishing he was still locked in the cage. And so, in a small anecdote, the three main types of people regarding perception and mindset are explained. But there is so much more to it.

Optimism. He seats himself on the opposite side of the cage to Pessimism and thinks long and hard about a positive outcome – escaping the cage. Although it appears ultimately impossible, the adversity the three men face does not mar the attitude Optimism possesses. In fact, the worse the situation looks, the higher Optimism’s spirits are, as he knows that when the going gets tough, the tough will soon be gone. However, his fatal flaw is that he is unable to see impossibilities, such as not being able to reach the keys. He also lacks the knowledge of how to act and is blinded by his rainbows to do anything more than speak up from his corner. A great character; a poor team player.

Pessimism. He seats himself wherever he can sulk. It is only by Optimism’s choice that they are opposite each other, as Pessimism is far too reactive to do anything besides sit and wait out his fate, which to him is death due to unnatural causes. Like Optimism, the only contribution Pessimism makes has to do with his voice. Their sole difference is that where Optimism finds words of encouragement, Pessimism questions actions and often finds resolve in mentioning every possible failure he can find. Another comparison can be made in the worsening of the situation. As the situation deteriorates, so Pessimism finds it in himself to validate his previous arguments in a “know-it-all, I told you so” fashion, because when the going gets tough, the tough overwhelms him. Pessimism is snarky and overly confident at this stage, and will stop at nothing to spread his misery. This he uses as a mask in order to hide his depressing and dooming thoughts. Where Pessimism beats Optimism, he also loses to Optimism, as once again, the significant being we are dealing with only sees one side of the story – this being the rain and sorrow and Grim Reaper. Blinded by the sleet, Pessimism acts about as much as Optimism does. A poor character; a poor team player.

Realism. He does not seat himself anywhere, but chooses to work on escaping the cage via the keys a short way off, because when the going gets tough, the tough gets going. In comparison to Pessimism and Optimism, picture a triangle, with Optimism and Pessimism making up the base angles and Realism forming the top (keep this in mind). He has traits of both Optimism and Pessimism, in that he realises that the task at hand is arduous, but has enough faith to see a silver lining. The culmination of these two great powers allows him to do something the others cannot – act! The knowledge of both extremes gives Realism the edge, and tells him that if he too just sat around, he would go nowhere. There is no point in crying about being trapped, nor is there telling everyone that life is going to turn out just fine. Realism needs action in order to thrive and often says very little of positive or negative, only acts and reviews later. Or, if he is lucky enough, reviews before. A great character; an even greater team player.

Now out of the cage, the three men part their ways and will more than likely never see each other again. They will definitely meet personality types similar to and even the same as what they were trapped with, and will deal with that situation equally to how they dealt with this one. Optimism will praise; Pessimism will dash hope; Realism will act. And for this general reaction, I have come up with a general formula in the form of that triangle I mentioned earlier.

NickyT434
Young dreamer and hopeless romantic in search of a deeper, soulful connection. I write and love from the soul; join my journey!

People With A Purpose

Your Heart Is Still Intact

Nobody has the strength to break you and the character you have built over a long time.
Read more

And When Nick Tells Gatsby, you Can’t Repeat The Past

Life Through Her Eyes