Taking The Easy Way Out Is Not Always Right 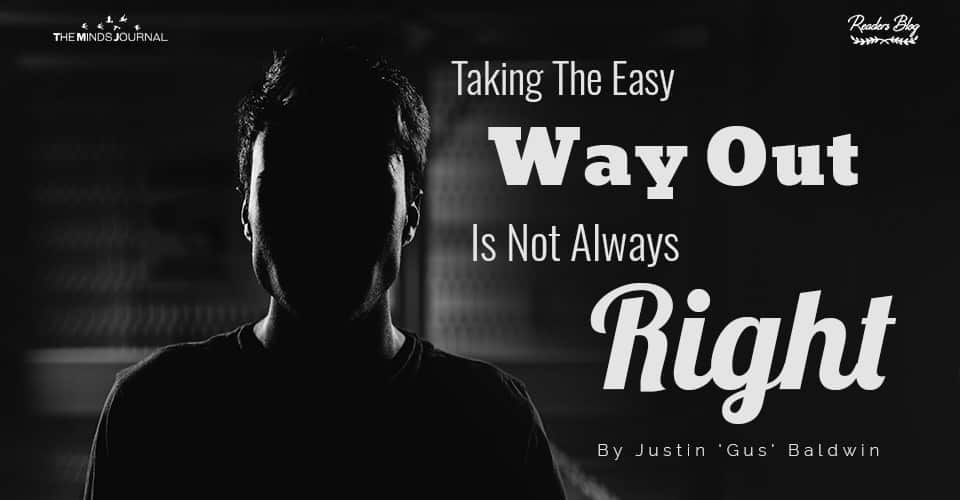 Taking The Easy Way Out Is Not Always Right

Correct me if I’m wrong but I believe it was Bartles & Jaymes who said, “Those who are looking for the easy way out, usually have the hardest time finding it”.

Taking the easy way out might seem so much easier and less conflicting. I won’t argue with you there. Most of the time it truly is.

Taking the easy way out in the moment is one of those decisions that are detrimental down the road.

It’s so easy to lie, blame someone for our troubles or screw-ups, be a “Yes Sir!”, or go along with the crowd.

We feel speaking up and doing the right thing will make us a target.

Sadly it does. This is why so many take the easy way out.

When you’re the person who takes the easy way out. It destroys your character.  If you go along with whatever the crowd says. You’re a pleaser. You’re a “Yes Sir!”. You can’t be trusted. You have no merit. No soul. Your words mean nothing.

The easy way out is the losers way out. They don’t stand for anything. They never did anything.

Anyone who made something of themselves became wealthy, started corporations. Did not take the easy way out. They stood behind what they believed in and worked their asses off to achieve their dream.

We have made being a decent person into being an evil person. Being honest with someone is considered rude and/or offensive. Being a person of passion and doing what makes you happy makes you an outcast. Going after what you want and making no excuses makes you selfish.

Taking the higher road is the loneliest road you will ever travel. Granted there is less traffic and you won’t be stuck behind that asshole cruising in the passing lane. Also, there probably won’t be a line at Chick-fil-A. But you will also most likely be sitting alone.

There will be a lot of challenges, criticism and you will be lonely most of the time. It’s much harder to be a decent person. You will feel used and abused and that saying will run through your head, “Nice guys finish last”.

Nice guys finish last because they don’t want to be up with the douchebags. Who are generally the ones cruising in the passing lane.

In the end, it’s worth not taking the easy way out and being a decent person. You have value in this life, you’ve brought value to the world, you’re trustworthy and your word means something.

There is a powerful book by Brene Brown called Braving the Wilderness. The title says it all. Stepping out into the wilderness and standing up for what we believe is right and standing behind who we really take a lot of bravery and vulnerability. And it’s totally worth it.

“Do not think you can be brave with your life and your work and never disappoint anyone. It doesn’t work that way.” – Brene Brown

See you at Chick-fil-A.

Pastry Chef and Writer. Grew up in a small town in Ohio with big dreams and couldn't wait to bust out into the world. www.gusbaldwin.comView Author posts