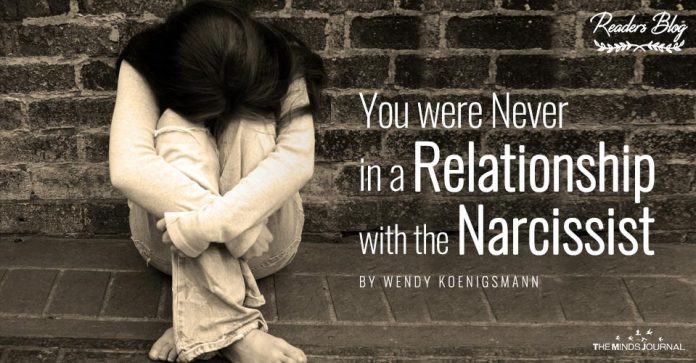 You were Never in a Relationship with the Narcissist

Not all relationships are equal, and when you are involved with a narcissist, you not only often feel alone, but you realize afterward that it was never a real relationship, but a way for the narcissist to use the illusion of a relationship for self-gain.

The Narcissist Is Not In a Relationship With Anyone

Many survivors of narcissistic abuse may have believed they were in a bonafide relationship with a narcissist.

The first misconception is that it was a truly genuine relationship. The narcissist frankly was never in a partnership with anyone, and narcissists cannot bond or truly connect with people.  Another misconception about being involved with a narcissist or a malignant narcissist is that you are actually sharing and connecting with them on a genuine mind, body, and spiritual level.

Past partners of narcissists may have felt that they were being utilized as a tool during the entirety of the relationship.

This often occurred during a certain point, perhaps an epiphany moment when the partner began to realize that they were being used for their resources like money, or maybe providing a place for them to live rent-free.  At a certain point in time, survivors will come to terms that they were merely taken on various spending sprees and other adventures, merely to please the narcissist. After the wild ride is over, they discovered that they had been fleeced. Some felt they were being used for other things in addition to money, like sex. If the partner attempted to flee the situation, the narcissist most likely wound them back into their spell with promises of undying love, loyalty, and future-faking. Because most people want to keep their relationships intact and give their partner a second chance, this tied into the charming narcissist’s facade of their convincing lies that things would get better.

One would wonder how it is so easy for narcissists to obtain what it is they want. It isn’t because the partner is gullible or easily led, it is most often this insidious future-faking that narcissists are infamous for. The narcissist’s partner was deeply in love, and the narcissist was an expert at manipulating their emotions because they can be very persuasive at creating the illusion that this love is a forever kind of love, and that they will always be there for their partner. Narcissists often come across as very bold, so they are also very clever at appearing to be more strong and stable than the average person. They are, in effect, actors playing a part, hiding who they really are behind a false mask.

A relationship is based on a state of connection as well as give and take. Communication is also a strong component of the relationship. The partner of a narcissist may have noted that the narcissist was not really interested in them as a person unless it was to extract the information they could use against the partner later on, and even then, the partner was never really an individual to the narcissist. The narcissist was primarily interested in obtaining resources from them or concerned with how the partner could benefit them in some way. These benefits are various in nature, but even if it appeared they liked having sex with the partner, money and material gain is usually their primary concern.

The sex and other conveniences are often a part of a secondary type of gain and come along with the territory of the illusion of a relationship. For the narcissist, romance is more of an adrenaline rush, as they do not become attached to their partners. Many survivors of narcissistic abuse also mention the pain and suffering regarding memories of the past, while thinking they were connected sexually to them, and this creates more trauma; however, the financial losses they incurred over future-faking while traveling with the narcissist, saving a down payment for a new home, and the many evenings shared together going out, spending money, and preparing for the coming future they thought they would share with their partner, makes this, in essence, a very cruel game, and survivors often refer to it as a “con job.” All of these losses coupled together are extremely traumatic, and then comes the aspect of the abusive behavior.

Wendy Koenigsmann
Wendy studied psychology and is a graduate student who writes avidly about narcissistic abuse; she has a deep interest in spreading awareness of abuse while helping victims and consequent survivors overcome trauma.
-Adverts-