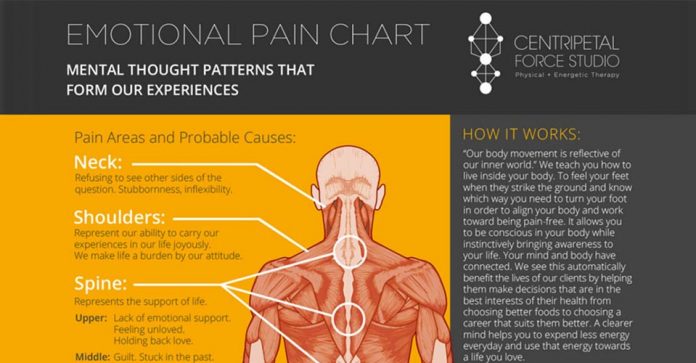 The Effects Of Negative Emotions On Our Health

When you have a pain, tightness or injuries in certain areas, it’s often related to something emotionally you are feeling within yourself. At first glance it may not seem this way because we are usually very out of touch with ourselves and our emotions in this fast paced world, but it’s often the truth. When I’ve had chronic pains in my back, knees, neck or shoulders, it wasn’t exercise, physio or anything in a physical sense that healed it, it was when I dealt with the emotions behind it. I know this because I spent the time and money going to physio and even though I wanted and believed I would get better, something wasn’t being addressed still. The more I addressed the unconscious thought pattern and emotions throughout my body, the more things loosened up and pain went away.

Joe Martinohttp://www.collective-evolution.com/
Joe Martino is the creator and founder of Collective Evolution 5 years ago and have been heavily at it since. He loves inspiring others to find joy and make changes in their lives. Hands down the only other thing he is this passionate about is baseball.
-Adverts-

How and why others might know what you’re thinking and feeling.
Read more
Lifestyle

Is there someone in the world who looks exactly like you? Is it even scientifically possible to have a doppelganger?
Read more
Lifestyle

“At a very basic level, people will be happier to be around you if you have quick nunchi,” says Hong.
Read more
wpDiscuz
16
0
Would love your thoughts, please comment.x
()
x
| Reply