What You Should Know About Narcissists, NPD And Their Partners 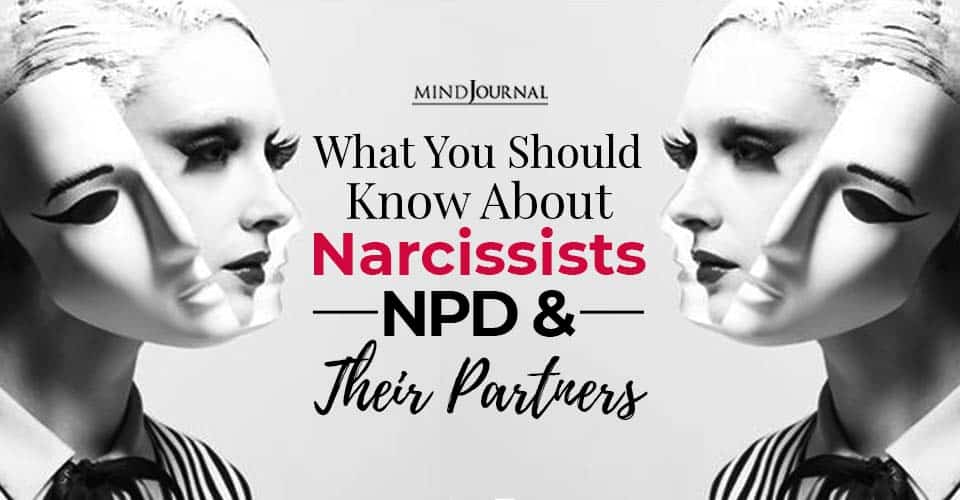 These partners also lack boundaries and absorb whatever is said about them as truth. In vain attempts to win approval and stay connected, they sacrifice their needs and thread on eggshells, fearful of displeasing the narcissist. They daily risk blame and punishment, love being withheld, or a rupture in the relationship.

They worry about what their spouses will think or do, and become as pre-occupied with the narcissist as they are with themselves. Partners have to fit into the narcissists’ cold world and get used to living with emotional abandonment.

Soon, they begin to doubt themselves and lose confidence and self-worth. Communicating their disappointment gets twisted and is met with defensive blame or further put-downs. The narcissist can dish it, but not take it. Nevertheless, they stay, because periodically the charm, excitement, and loving gestures that first enchanted them return, especially when the narcissist feels threatened that a break-up is imminent.

When two narcissists get together, they fight over whose needs come first, blame, and push each other away, yet are miserable needing each other.

Despite having a seemingly strong personality, narcissists lack a core self. Their self-image and thinking and behavior are other-oriented in order to stabilize and validate their self-esteem and fragile, fragmented self. They share codependent core symptoms of denial, control, shame, dependency (unconscious), and dysfunctional communication and boundaries, all leading to intimacy problems.

One study showed a significant correlation between narcissism and codependency (Irwin, 1995). Although more aggressive than passive, in my opinion, they are codependent.

Accommodating codependents and narcissists can be a perfect fit, albeit painful because the latter’s attributes and aura of success boost the former’s low self-esteem, which allows accommodators to tolerate emotional abuse.

Typically, accommodators aren’t authoritative and prefer a non-assertive, subordinate role, because their own power and often anger are repressed, frightening, and shame-bound. They seek and hunger for missing parts of themselves and idealize new partners’ qualities, which they hope to absorb. This is why two accommodators rarely get together.

They’re in awe of narcissists’ self-direction and “strength,” and live vicariously in the reflection of their success, power, protection, and charisma, while unaware of narcissists’ fragile personas and hidden shame (Lancer, 2014).

Accommodators attach to narcissists who appear bold and express their needs and anger, yet themselves feel needless and suffer guilt when they assert themselves. Caretaking and pleasing make codependents feel valued. Because they feel undeserving of receiving love, they don’t expect to be loved for who they are–only for what they give or do (Lancer, 2014).

Narcissists are also drawn to their opposites to support their pride and fill their emptiness–partners who are emotionally expressive and nurturing, qualities they lack. They need partners they can control who won’t challenge them and make them feel weak (Lancer, 2014).

Related: 7 Sneaky Things Narcissists Say to Get You Back

Often in these relationships, narcissists are the distancers when more than sex is anticipated. Getting emotionally close means giving up power and control. The thought of being dependent is abhorrent. It not only limits their options and makes them feel weak, but also exposes them to rejection and feelings of shame, which they keep from consciousness at all costs.

(Lancer, 2014) Their anxious partners pursue them, unconsciously replaying emotional abandonment from their past. Underneath they both feel unlovable.

For loved ones of narcissists, doing the exercises and using the recommended strategies in Dealing with a Narcissist: 8 Steps to Raise Self-Esteem and Set Boundaries with Difficult People can be helpful in dealing with a narcissist. Doing them can also help an ambivalent partner get clearer about whether he or she wants to stay in the relationship. See also Therapy for NPD and Narcissists.