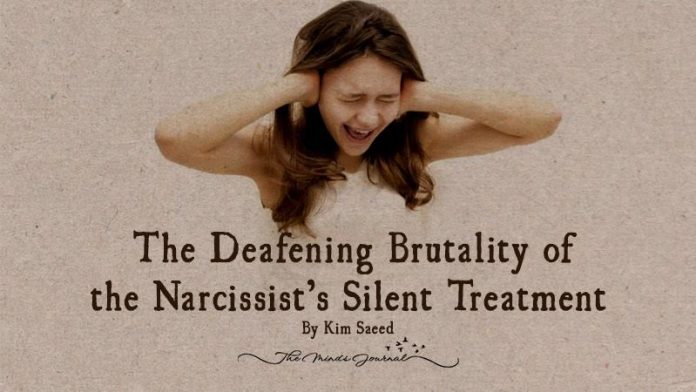 The Deafening Brutality of the Narcissist’s Silent Treatment

Feeling included is crucial to the human experience.  Humans must feel connected to each other to be happy, even introverts who enjoy a large amount of independence.

According to Maslow’s Hierarchy of Needs, the need to belong and feel accepted falls under the basic needs of food, water, and safety.  In fact, this need can be so strong, it can override the needs for food and safety.

Psychologists consider the silent treatment a form of abuse.

It’s a popular form of mental torture used by Narcissists, whereby they cut their victims off by not talking to them for extended periods of time. Sometimes days or weeks, which keeps the victim in a constant state of fight-or-flight, during which they feel isolated and rejected, as well as physically sick.  The body’s physical reactions to this mental anguish are real. Headaches, stomachaches, and a general punched-in the-gut feeling.

When the Narcissist ignores, shuns, and ostracizes you, it’s more hostile and aggressive than if they’d verbally attacked you.  Because this type of abuse is harder to specify, it can be harder to heal from.

When someone is ostracized it affects the part of their brain called the anterior cingulate cortex.  Silent treatments trigger what is called “Social pain” in this part of the brain, which also detects actual physical pain.

The depth of pain from the silent treatment depends upon the intensity of the Narcissist’s ignoring.

The pain detected by the brain consequently makes the victim feel lonely and rejected. It lowers their self-esteem and the victim thinks his/her life is unworthy. It causes great harm to the sentiments of the victim. This condition may even cause critical conditions and permanent damage to the victim’s psyche.

Narcissists use the silent treatment as an aggressive measure of control and punishment for something his or her partner did; a sadistic form of “time-out”, ostracizing the victim as motivation for them to behave.

It is the ultimate form of devaluation, causing its target to feel voiceless, alone, dismissed, negated as a person; invisible.  The detrimental effects of this type of abuse include:

Emotional: Since it is a form of social rejection; it provokes a mix of negative emotions including: Frustration, intense anger, and eventually, resignation and despair.

Psychological: Low self-esteem, a sense of loss and not belonging, increased stress and loss of control.

Behavioral: The constant fear of receiving the silent treatment casts a shadow of uncertainty in your life, you begin to second-guess yourself: Am I doing the right thing? Am I saying the right words? You try hard to avoid it, which changes you onto a person that is no longer YOU.

Examples of the Silent Treatment:

If your partner has used this form of emotional abuse to get you to comply with their demands, you should consider using the opportunity to initiate No Contact.

Do not reward this passive aggressive abuse tactic, as it will lead to them doing it even more since they derive a sense of satisfaction (if not “guilty” pleasure) at seeing the negative effect they can have on you.

Specifically, don’t send pleading text messages or lengthy emails asking them to respond to you or explain how much they’re hurting you.  From their perspective, it proves to them that they are highly important, even more important than you are to yourself. Implementing NC during the silent treatment would put you back into a place of power because when they prance back onto the scene believing you’ll fall to their feet, they’ll encounter nothing but the sound of crickets…

If you’d like to learn more about Narcissistic manipulation tactics and healing from narcissistic abuse, visit Letmereach.com, where you’ll find advice, articles, and holistic healing methods that will help you heal trauma, pain, and soul loss caused by narcissistic and pathological abuse.

5 Things Sociopaths and Narcissists Say to Make You Feel Crazy
The Secret Language of Narcissists, Sociopaths and Psychopaths: How Abusers Manipulate and Traumatize Their Victims
The Toxic Attraction Between An Empath And A Narcissist

Signs You’re Arguing With A Psychopath .

7 Signs You’ve Arrived as a Survivor of Narcissistic Abuse

I have a few friends… Read more »

So do narcissists really have a “playbook” used to manipulate you?
Read more
wpDiscuz
9
0
Would love your thoughts, please comment.x
()
x
| Reply