Why Narcissists Lie About Their Health: 3 Reasons For Deception 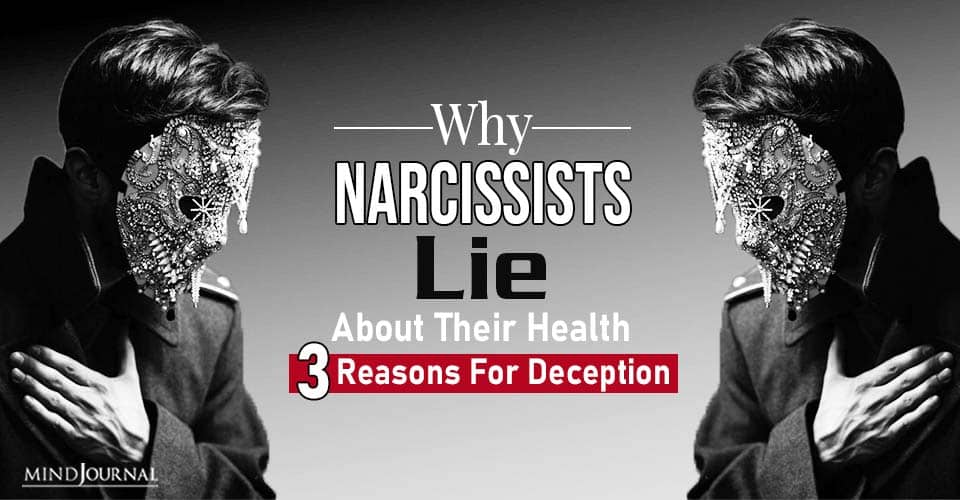 But it turned out that the cancer claim was simply an attempt to regain control over Genevieve’s emotions and put the ex back into center stage. The ex “kept texting… not about her illness, but to see if I still wanted to be her beneficiary. I showed concern for her illness but told her it’s not up to me who the beneficiary is. She let me know when she changed the beneficiary and said she hoped I was happy and got what I wanted.”

Because Genevieve didn’t respond to the breast cancer claim and go back to the toxic relationship, the ex turned the tables and guilted Genevieve. “I was, of course, sworn to secrecy about the breast cancer, but that’s because it didn’t exist. At the same time, she was posting photos of her new girlfriend and tweeting about flying between states to commute. People who are sick aren’t partying and taking airplanes to work.”

Related: Why Your Abusive Narcissist Partner Claims To Be The Victim

Having a serious illness that is known for bringing physical and mental anguish is almost a badge of honor for certain people. Being labeled as “strong,” “brave,” or “a fighter” are positive attributions for anyone, and more so for those going through a supposed “battle.” Some narcissists may use this to turn their reputations around from being called difficult or rude into struggling or persevering. By relying on other’s empathy and sympathy, narcissists can manipulate goodness into a vehicle for self-help.

Claims of beating cancer or fighting a devastating illness can cover up even the darkest of intentions and cause people to put on their rose-colored glasses and look away from past wrongdoings. Narcissists are particularly talented at turning the tables and rewriting narratives to make themselves look like the hero and the martyr.

Andy, for example, states that his ex-partner used her chronic illness during their custody battle. “Her illness was well maintained, and her condition stable and medicated—as it had been for years during our relationship—but the lawyer flouted it to the judge so that she looked like a poor, selfless, suffering mother desperate for her children. My ex would sit in front of the judge looking pained and downtrodden but was laughing and smiling outside the courtroom.”

Getting and maintaining attention is, in itself, a near-compulsion for many narcissists. People tend to rally around cancer patients and those with other debilitating illnesses in the forms of fundraisers, support groups, special events, and benefits. Don’t be surprised to see lots of selfies and hashtags about the narcissist’s illness or “journey”!

Narcissists struggle mightily to foster true emotional relationships with other people and typically only create tenuous ties for personal gain. To them, attention is mandatory and a necessary part of relationships. Their overwhelming sense of entitlement allows them to think the attention and support are warranted and deserved, regardless of the honesty of the situation. This is the same reason why narcissists are so prone to cheating on their partners; they feel deserving of the extra attention and shouldn’t have to sacrifice their own wants.

When it comes to a cancer diagnosis or other physical impairment, people tend to open their hearts—and their wallets—very easily. Those with narcissistic tendencies are already highly skilled at manipulating others and playing the “cancer card” (or faking another kind of health scare) may be a quicker means to an end.