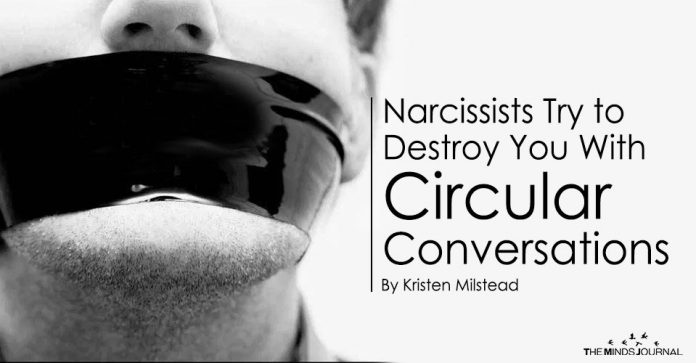 How and Why Narcissists Try to Destroy You With Circular Conversations

Narcissists have no interest in coming to a resolution that benefits both people, because:

1) It would be giving up superiority and control to admit a wrong.

2) They can’t openly admit their cruel behavior was executed without any thoughts about how it would hurt us or even that it was intentionally done to hurt us because it doesn’t benefit them to show us their remorselessness.

3)They gain narcissistic supply from our confusion and pain.

If they started the argument to gain supply– perhaps by accusing you of something that didn’t happen–when they have had enough, they will end it abruptly by a change of subject or something to that effect.

If you asked a question, such as in the conversation above, the narcissist will use deflection tactics hoping that you will end the conversation. Those tactics often won’t work because they don’t align with your reality or achieve the goals of the conversation you set out to achieve. The narcissist is not agreeing to anything you’re saying or asking, and instead, is having crazymaking verbal interactions with you.

Narcissists, not interested in our goals as non-narcissists within the conversation, will then find a way to end it, usually by stonewalling or even leaving.

Conversations with narcissists are like being in a maze where you try to stay on the right path toward the exit, however, the narcissist constantly drags you down one more dead end hoping you’ll get lost and give up.

Red Flags Revisited: A Look at How They Use Language to Manipulate

You can’t get what you need out of conversations with narcissists, and this fact is an overt, non-ambiguous cornerstone of how they manipulate.

This is why seven out of the first eleven Red Flags of Toxic People as also identified by Jackson Mackenzie in Psychopath Free and popularly re-distributed online are centered around the deflection techniques they use in conversations with them.

“They blatantly deny their own manipulative behavior and ignore evidence when confronted with it. They become dismissive and critical if you attempt to disprove their fabrications with facts. Instead of them actually addressing their inappropriate behavior, somehow it always becomes your fault for being ‘sensitive’ and ‘crazy.’ Toxic people condition you to believe that the problem isn’t the abuse itself, but instead your reactions to their abuse.”

2. Cannot Put Themselves in Your Shoes or Anyone Else’s For That Matter.

“You find yourself desperately trying to explain how they might feel if you were treating them this way, and they just stare at you blankly. You slowly learn not to communicate your feelings with them, because you’re usually met with silence or annoyance.”

“There is always an excuse for everything, even things that don’t require excusing. They make up lies faster than you can question them. They constantly blame others–it is never their fault. They spend more time rationalizing their behavior than improving it. Even when caught in a lie, they express no remorse or embarrassment. Oftentimes, it almost seems as if they wanted you to catch them.”

4. Focuses on Your Mistakes and Ignores Your Own.

“If they’re two hours late, don’t forget that you were once five minutes late to your first date. If you point out their inappropriate behavior, they will always be quick to turn the conversation back on you. You might begin to adopt perfectionistic qualities, very aware that any mistake can and will be used against you.”

5. You Find Yourself Explaining the Basic Elements of Human Respect to a Full-Grown Man or Woman.

“Normal people understand fundamental concepts like honesty and kindness. Psychopaths often appear to be childlike and innocent, but don’t let this mask fool you. No adult should need to be told how he or she is making other people feel.”

6. Accuses You of Feeling Emotions That They Are Intentionally Provoking.

“They call you jealous after blatantly flirting with an ex–often done over social networking for the entire world to see. They call you needy after intentionally ignoring you for days on end. They use your manufactured reactions to garner sympathy from other targets, trying to prove how ‘hysterical’ you’ve become. You probably once considered yourself to be an exceptionally easygoing person, but an encounter with a psychopath will (temporarily) turn that notion upside down.”

7. You Fear That Any Fight Could Be Your Last.

“Normal couples argue to resolve issues, but psychopaths make it clear that negative conversations will jeopardize the relationship, especially ones regarding their behavior. Any of your attempts to improve communication will typically result in the silent treatment. You apologize and forgive quickly, otherwise, you know they’ll lose interest in you.”

These conversational techniques they use to avoid reaching a resolution with you provide the clues that tell you that they do not care about your feelings in the conversation. They are not empathetic to your point of view or what you need to get out of the conversation in order to feel heard or understood.

They should tell you exactly who you are dealing with: someone whose intentions in those conversations–and their underlying intentions overall– are not aligned with yours.

Written by Kristen Milstead
Originally appeared on FairyTaleShadows.com
Printed with Permission
You may also like 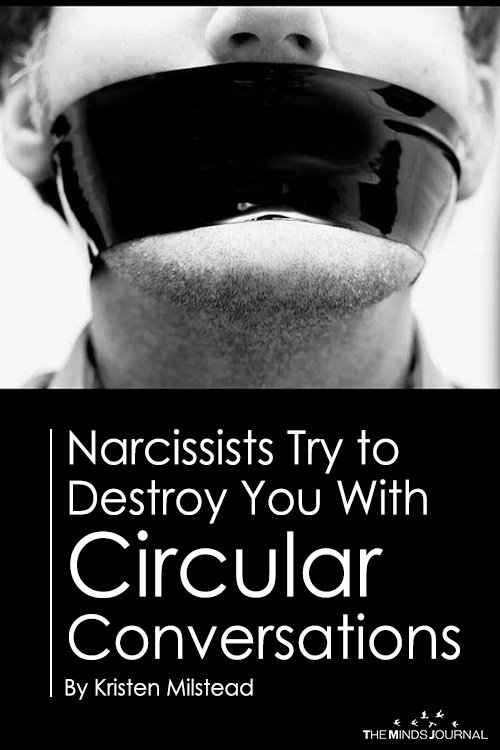 Kristen Milsteadhttps://fairytaleshadows.com
I started this blog on a whim at the end of 2017 because I didn't have anyone to talk to about the things I had just experienced in the relationship I had just left.
-Adverts-