Narcissistic Triangulation and The ‘Normals’: Why They Behave The Way They Do 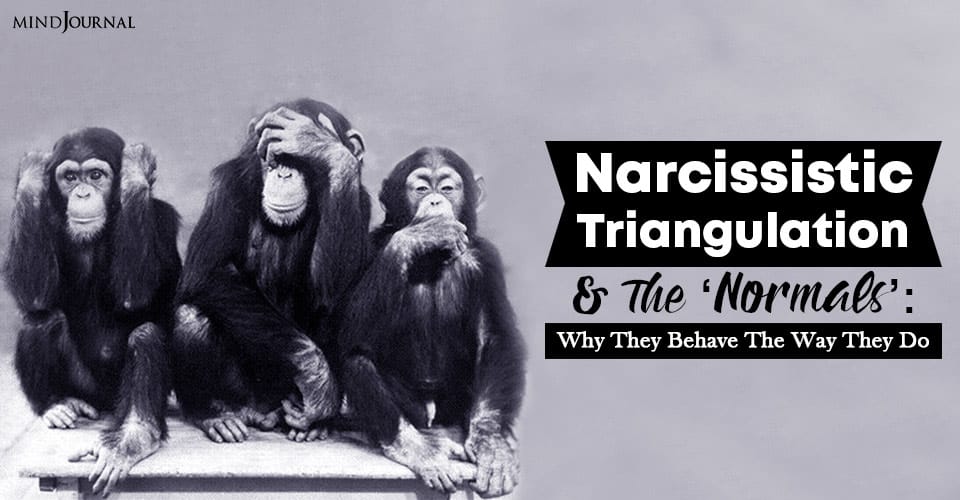 V – “So he said that if I didn’t do it he would tell everybody in the church that I was sleeping with the vicar and he would post pictures of me on the internet.”

7. He Did Say She Was Crazy

V – “He hides my purse so I cannot go out, he tells me what I can and cannot eat, he won’t allow me more than a minute in the shower and stands watching me while I wash. He follows me around the house and keeps staring at me, I can even feel him watching me when I manage to slip out for a while. I know he is following me.”

N- Thinks to themselves “It’s just as Neil predicted. He said she was losing her mind and coming out with all these fantastic stories. He is genuinely worried about her and I can see why now. Poor thing. Poor him too.”

V – “He sometimes doesn’t speak to me for days on end. He just sits and sulks and ignores me. It is horrible. I hate it.”

N- “Oh that’s just men for you. They all do that at some point. It’s part of the ups and downs of being in a relationship, just ignore it and get on with your day, he will soon come round, you will see.”

V- “Hi it’s me, can I come round to see you. I need to talk to someone. He is doing it again. He has spent the last two hours shouting at me and throwing plates around the kitchen. I am sick of this, I cannot cope.”

N – “I’d love to help but I er, have an appointment. Look I have to go; I will call you later” – I’m not getting drawn into their domestic dramas I have my own life to look after.

V- (After a lengthy description of a catalog of odd and strange behavior) “So what do you think, what should I do? I cannot go on like this.”

N- “I don’t know what to say really, I can’t work out why he would be lovely with you one week and then awful the next, it does add up. Perhaps if you sat down together and tried to work things out.” (I haven’t a clue what is going on here.)

Not once does the “normal” turn to you and say,

“You are being abused by a disordered person.”

“You have been ensnared by a narcissist.”

Instead, when you describe the behavior to a “normal” you are met with one or more of the responses detailed above. We know this will be the case. We know it will leave you hurt, bewildered, and lacking the help and insight you so desperately need. And you keep banging your head against the wall thinking if the normals are blind or stupid.

Fortunately for our kind few people really know what we are and what we do.

We don’t walk around with a sign around our neck stating “I am an abusive narcissist”. . People think the psychopaths and sociopaths appear like some crazed ax murderer. We do not.