Narcissist Mirroring: How Narcissist Manipulates You Into Loving Them

Don’t cling on to a fantasy of somebody they really aren’t.

Don’t waste your energy and time changing everything externally to try and fix something that’s not working to try and get that fantasy back.

It’s a fantasy, a reflection.

Understand what mirroring is.

If you’re not in a relationship and you’re first dating, please bear mirroring in mind.

Or even in the workplace or life in general, as mirroring is also a clever sales technique.

It can be used as a marketing technique, mirroring your desires back to you to persuade you to buy.

When it comes to dating, the same can apply.

A narcissist packages him or herself up into everything that’s going to fulfill your desires and dreams.

But remember, mirroring is a manipulative tactic.

The old mantra is a good one:

If it’s too good to be true, then it probably is.

If it’s too much too soon, then heed the warning signs.

Don’t listen to what they say.

They’ll talk the talk as smooth as silk.

Observe them as they do you.

Consider them as you would a new job or a product you want to buy.
Do they meet certain criteria that fit nicely with your core values, beliefs, standards and goals in life?
Are they nice?
Do they treat the staff in this cafe with the same respect you would?
Do they have the same sense of humor?
Do they believe in the same things about politics as I do?

Almost treat it like a job interview.
What are those core values that you have that are intrinsic to who you are?

Instead of listening to all those dream-like things they mirror up to you as some sort of fantasy, have your own checklist of the things that are important to you.

Instead of projecting onto them the dream of what you hope come true one day in the future, judge them against who they are now.

Most importantly, on how they behave.

Does their walk match their talk?

If not, then accept this date hasn’t worked out, they’re not good enough for you.

Go and find somebody else who is.

See mirroring for what it is and the red flags for what they are too.

A warning sign that this mirror will crack sometime in the future.

As they bask you in the sunshine at the start, don’t get hypnotized by them.

If it feels magnetic when you first meet them and you feel strangely pulled towards them, try to break free while you can.

The further you get reeled in, the harder it will be to leave.

Narcissist manipulation is a powerful tool.

Mirroring is just one of them.

Loving a narcissist is a lot like loving a false version of yourself. They observe you and reflect back what you say and do to create a fake connection. They will mimic your energy, expressions and tone to trap you in their grotesque maze of lies and deceit. 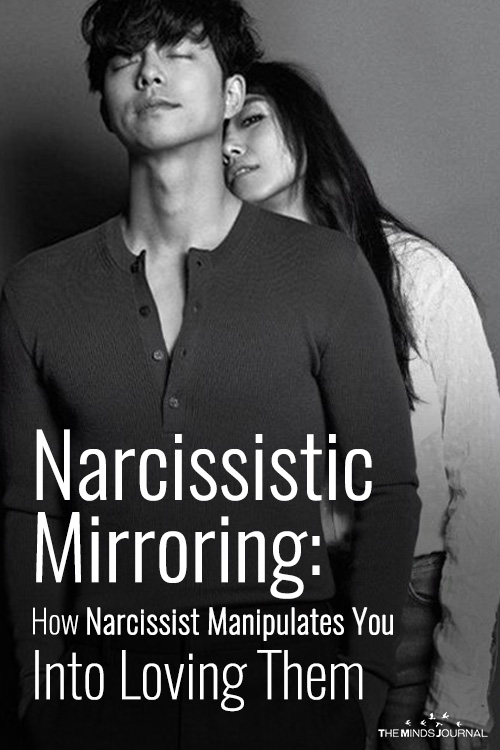 Vivian McGrathhttps://www.vivianmcgrath.com/
Vivian McGrath is a TV Exec Producer making documentaries for US/UK and Australian television networks. She’s a survivor of domestic violence, motivational speaker, author, and empowerment coach. She helps women who are ready to recover from abusive relationships, fall back in love with themselves and never settle for anything less than they deserve ever again. If that sounds like you then join her FREE Masterclass here: https://joinnow.live/s/xMOdfN
- Advertisment -

People Say, Then Let Them Say