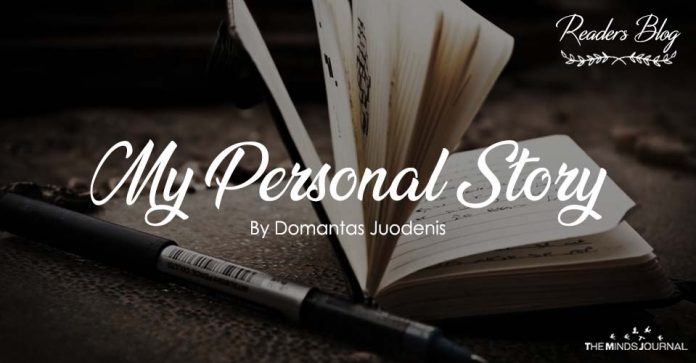 My Personal Story – My name is Domantas Juodenis

We moved to another city called Narni (Italy). I was already finishing my middle school and I wanted to go to high school but my mother did not have money to afford higher education and I was afraid because I was rejected twice as average. My mother’s companion forced me to work and I accepted because I always thought that I prefer to work than to study and I was totally wrong. So I worked for him for a year after the first middle schools. After which I decided to go to the professional school. I joined the carpenter for 3 years and I was already 17 when I graduated as the best student. But I wasn’t quite satisfied. I wanted to be famous so I enrolled in the school to do modelling for fashion shows. After the second competition I won the title of the most beautiful model of Italy in second place. But unfortunately I could not go on because I was 5 months younger than being 18 years. But still I had not lost hope. At 20 years of age, I found a school to make my album and do just this job and I sign up. I passed the course and everyone told me that I’m ideal for this job. So I went with my mother to the secretary to complete the documentations. But we did not have enough money to pay, so without revealing to my mother’s partner, we gave his current account details to pay for the necessary. After a couple of weeks we told him about it and he became nervous but then added everything was all right. So he paid for every month and everything was fine. As the time passed by, he became jealous and began to hate me and stopped the payment. It was just the beginning of my dream. Only 600 euros was left to be paid for the course. But he wasn’t convinced. I tried to talk to him about everything; it was completely useless.

I started living my life like a dog set free and I went away from them to live on my own because I felt very disheartened about my mother’s condition as her partner left her for another woman. When I was 22, my mother’s parents died. My mother was in a miserable state. I left all my work and I went with her to Lithuania. His partner promised us that he would come for us after two weeks of funeral and grief but he lied and left us in Lithuania forever. So with last little money we started ordering the whole house garden forests and lakes. Unfortunately, the money comes and goes; we were without a euro to survive. Luckily my grandfather had a tractor that we could sell, but it was just to have something to live so we sold it for 500 euros, and we survived for a month. As winter came, we were without any food, even bread. I finally found a job for a short time to spend the winter but I could not continue because the work was too difficult and I was hungry. So I only lasted for a couple of weeks. My mother left me for her former company in Italy and spent three months there with him and I was left alone without help because he hated me and did not want me to come.

How do you think I survived? I found that I can take a loan to survive and so I did. After a lent and more, I was able to spend the winter. After my mother’s return he met a man in Lithuania but he was completely without anything; just stood by her because he said he loved her. He was a hard worker and good man to the point that my mother decided to make him a part of our family. Problems started when we only had the benefit of the job centre. He was fine with my mother but didn’t want me next door. For me it was very difficult to accept him as a member of our family but I was happy for my mother. One day I decided to leave them discreetly because I could no longer bear to see my mother suffering for me. I changed the village for a small town called Veisiejai, with little money I had. I took rent from a lady for sleeping in. I lived until I found the job that was comfortable for me and I met a couple of friends to help me establish myself. After a month I bought the flat for rent, and slowly my life got better. I was happy with what I created and made peace with my mother and her friends.

Do you believe that children fighting is completely wrong, and anytime that happens, grown-ups should intervene immediately?
Read more