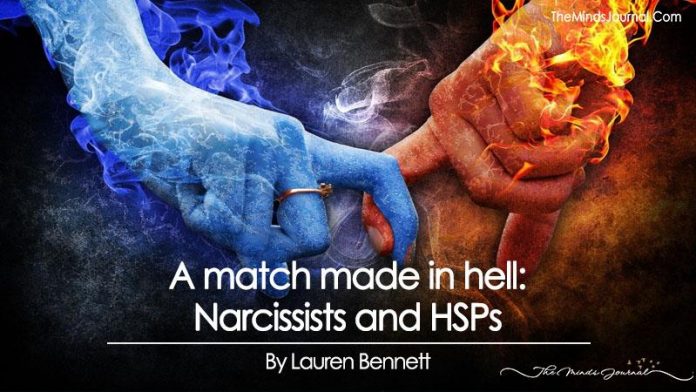 A Match Made In Hell: Narcissists and HSPs

I think Narcs often have abusive or neglectful parents who fail to mirror the child in a positive way when they are very young, and as a result, not being able to mirror the parent in return, they don’t develop a true self and spend their lives trying to mirror the people they come in contact with and HSPs make this mirroring easier for them.

Unfortunately, by this point, it’s far too late for them to internalize the mirroring of the other person, and so it never infiltrates beyond the surface.

This explains why the Narc will act like they are the most understanding and caring person in the world when the HSP first meets them, but since they never internalized the behavior, it’s not really part of them and they quickly move on to abusing the HSP because deep inside they envy and hate the same behaviors they have so recently “mirrored.” Narcs cannot be helped in traditional therapy because, in order to reach them, there has to be a self there to be reached, but Narcs have lost their true self, or it’s become so deeply buried it can never be accessed in any normal way, if ever.

There’s another way a person can become a psychopath. Some people cross a line at some point in life, a line where they seriously violate some inner (but maybe not fully developed) moral code. For example, in “People of the Lie,” Dr. Peck talks about a man who almost became evil. The man, who was by all accounts a good man, a devoted husband, and father, suffered terrible panic attacks when crossing certain bridges as a requirement of his job.

To help alleviate his anxiety attacks, the man made a deal with the Devil: he told the Devil if he could make it across the bridge without a panic attack, then he’d give the Devil permission to allow something terrible to happen to his son. The man said he didn’t really believe in the Devil, so he knew nothing would actually happen and therefore really wasn’t that bad a thing. But it’s still a deal with the devil, and Peck was horrified. The fact the man felt remorse and shame (and confessed his “sin” to Dr. Peck) saved him from crossing the line into becoming evil himself.

We have all heard stories of group violence, situations where people who otherwise would never partake in violent crime by themselves, enthusiastically take part in looting, mass violence and killing when part of a large group. In a way, these people have also sold out to evil and have crossed a moral line. Soldiers in wars are obliged to kill innocent victims, sometimes women and children, and the deep guilt and shame they feel after doing something so alien to their own moral code could be a big reason why so many of them become mentally ill or suffer from the more severe forms of PTSD.

As an HSP (and also Aspie) child raised by a Narcissist mother, I was at a huge disadvantage. I suffered the whole gamut of psychic insults visited on the hypersensitive: bullied in school, bullied at home (and sometimes filled the role of the Golden Child too, since I was an “only”), and bullied by most of my serious boyfriends and finally my ex-husband.

I could see “through” my mother at an early age, and knew her occasional professions of “love” were utter bullshit. When I was about 6, I remember a very vivid dream that she came into my room, and instead of a loving face, all I could see was solid black eyes–the kind of demon eyes seen in horror movies, coupled with a sneer so full of hate that I felt like I turned to ice inside.