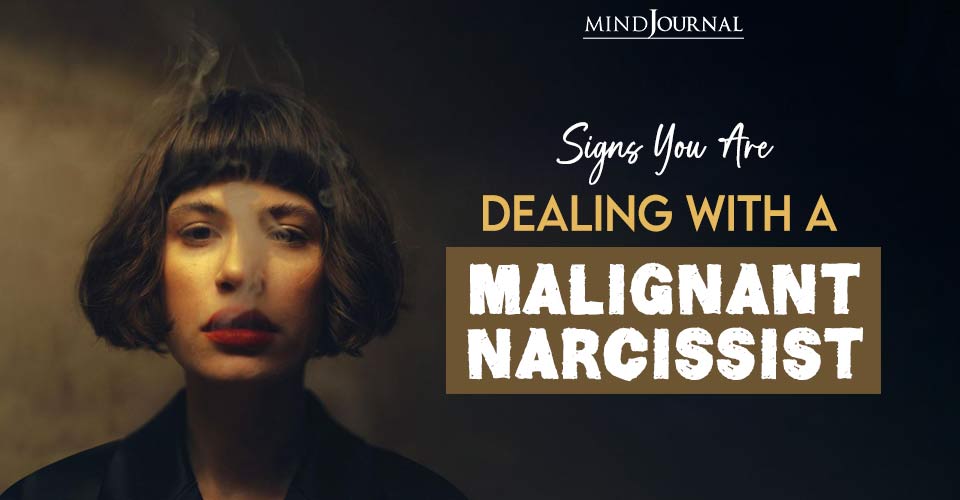 Malignant narcissists like to inflict pain and they derive pleasure from seeing others suffer. The torment can be financial, emotional, verbal, physical, or sexual, but the common objective always remains the same; to take others’ happiness or assets and watch them dangle helplessly.

Crafting a fake image is a signature style of people with a malignant narcissistic personality disorder. They are always mindful of how the world must perceive them and this is why they painstakingly maintain a fake image of grandeur. A malignant narcissistic personality will not think twice before putting up their kids or spouses as a prized possession. They will be always boastful of their achievements and pretend to be more successful and well put together than they really are.

As mentioned before, a malignant narcissistic personality may suffer from severe paranoia all the time. They are suspicious of everyone and constantly live with a fear that their toxic narcissistic traits will get exposed.

Read: 10 Manipulative Strategies Used By Narcissists To Dominate You

Some Other Traits Of  Malignant Narcissistic Personality Disorder May Include:

Other non-genetic factors that are often found responsible for a malignant narcissistic personality disorder include:

How To Deal With A Malignant Narcissist

If you realize you are dealing with someone who has a malignant narcissistic personality disorder, running for the hills is the wisest move. But if for some unavoidable circumstances you are unable to do so, the following tips might prove to be helpful:

Remember that no relationship in this world should come at the expense of your dignity, sanity, and mental health. If someone is causing you emotional, physical, or financial duress, seek help through proper channels. You might want to get the authorities involved if your safety is at risk.

Speaking to a mental health professional or a relationship coach might also help, depending on the severity of your situation.

So did you find our article on Malignant Narcissistic Personality Disorder helpful? If you have any more questions on this topic or want to share your story, don’t hesitate to comment down below.

No, malignant narcissists are devoid of empathy and incapable of attuning to emotions

Do malignant narcissists know what they are doing?

Both yes and no. Malignant narcissists are aware of their behavior but they cannot fathom its impact.

Why are narcissists so paranoid?

Pathological narcissism gives birth to paranoia. In simple terms, narcissists are afraid of getting exposed.

Are all manipulators narcissists?

What is a malignant narcissistic personality disorder?

5) Lying and dishonesty Yes, all of us lie from time to time, sometimes out of fear, sometimes to protect the other person from getting hurt. But when your partner lies repeatedly for their own personal gains, then you don’t have to tolerate it in the name of love. Dishonesty… Read More »8 Toxic Behaviors To Never Tolerate In A Relationship