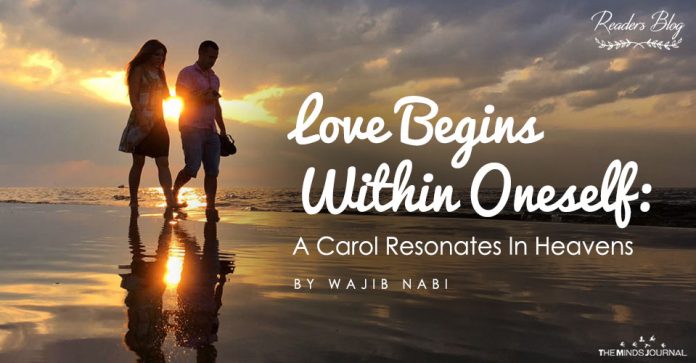 Love Begins Within Oneself: A Carol Resonates In Heavens

Arif was not only a decent person but everyone used to who praise him. He was from aroha, and was a clerk in bank. He got married at the age of 25 at that time he had 10000 rupees from which 5000 spent on his marriage.

His wife shehnaz was not only beautiful but she was appraise worthy women. They both used to love each other from the depths of their hearts.

After 3 years he blessed with a beautiful daughter her round eyes and small lips were seem to be from heaven. Her parents had difficult time to come up with a beautiful name to give their daughter an identity.

They don’t used to like suggested name by others. Shehnaz wanted her husband to give their daughter a name.

Arif thought for a brief moment and said “ What’s hurry in giving a name to her?”. Shehnaz was concerned about giving her a name. “I don’t want my daughter to be with no name and what should I call her for now?, Her face showed dolour expression.

“For now, You just call her baby”. Arif said and one more thing (He continued) wait for a day or 2 I will buy a Urdu dictionary and go through it and I’m sure I’ll come up with a good name for our daughter”.

“I haven’t heard anywhere that people search from dictionary to give their child a name”. Shehnaz Said.

“No they do, My friend Shahid did he founded a name for her daughter ummm what was that name ah! (Nikhat) .
“What it means?”. Shehnaz asked

Arif wife watched her daughter for a moment and said “I don’t want an old name for my daughter go and buy a dictionary”.

Arif smiled “But I don’t have money”. “Look for a purse in my drawer I have saved money you can take out desirable amount”

Arif went to market and visited few book shops for a good dictionary and then he bought one with decent price as he was returning home with a dictionary in his hand as he was looking through pages someone called his name. He turned and saw his friend Shahid.

He told him to have a tea at nearby dhaba. During conversation Shahid came to know that Arif got blessed with a daughter then he asked “What is her name?”.

Arif took a glance of dictionary which was red in colour and said “We haven’t gave our daughter a name yet”. Arif said “There isn’t any paradoxical thing in between and there are many name (Amreen,Gul,Naz, Sana) give her any one of them”

“That’s rubbish”. Arif said
“May God give her a long life” Shahid said as he hugged him.

Arif continued his way to home and start wondering that there is nothing to do who were the name. He thought that he must throw dictionary in a well and tell his wife that the name is not that much important the only thing matter is their daughter life and she must pray for her.

As he was drowning in deep ocean of his thoughts his hear started to beat irregularly. He stopped and thought that it’s because of his stress over a name and brushed it off. He continued his way to home where something was waiting for him. A mishap was betided.

He saw a horde of women at his house and his face went blank cause of unawareness of situation as he moved further the words knocked on the doors of his eardrums horrible enough to rip his soul a part. “I think her daughter is about to die in a moment”.

Wajid Nabi
Wajid Nabi is an author of several books including Paradox Killer, Hallucination and What Makes A Teacher, He is teacher and writer by profession and relationship coach. He is also finance guide help people in managing their assets.
-Adverts-