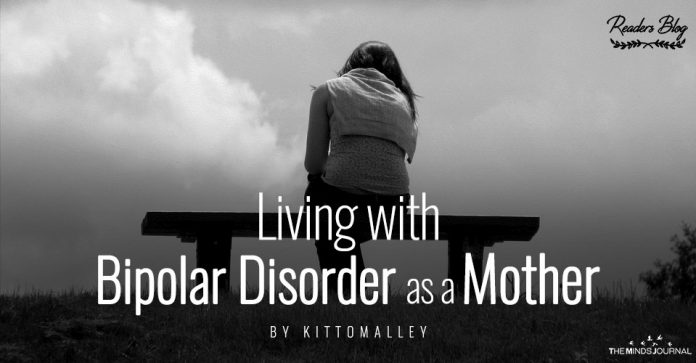 Living with Bipolar Disorder as a Mother

Since divalproex sodium passes through breast milk, we agreed it was time to wean him. By this time my son was over two years old, and I was FED UP with waiting for him to “naturally” wean. Upon being prescribed divalproex sodium, I left my son with my husband for the weekend for cold turkey weaning while I went to my parents.

My son couldn’t believe Mommy wasn’t coming back home for the night. She had never left him overnight. Though it was raining, he insisted on sitting at the driveway, waiting for me to return, then my husband convinced him to sit under the walkway for cover from the rain, then sit in the front doorway, then at the foot of the stairs, then at the top of the stairs, then finally in the master bed with Daddy looking downstairs at the front door, until he finally fell asleep. Later, when I told this story to my psychotherapist, she found the story touching and indicative of how sensitive and caring my husband is.

The following week, I found a psychiatrist who would see me. Finally, at the age of thirty-nine with a highly active, still nursing toddler son, I was diagnosed with bipolar disorder.  I went back to work because I thought my son was better off in someone else’s care, now that I was diagnosed with a chronic, severe, progressive, degenerative mental illness. I had internalized stigma against serious mental illness. For some reason, I thought it okay to be a depressed mom, but not a bipolar mom. I was the same person before and after the diagnosis. The only change was my treatment. Instead of only taking an antidepressant, now I was taking a mood stabilizer.

Keeping with my history of hypomanic workaholism, I worked increasingly long hours until I once again fell apart. I broke down crying at work and found myself unable to pull myself back together and return to the office. I tried taking a mental health week off but couldn’t even make it through the weekend without succumbing to uncontrollable crying jags. To get myself stable, I had myself voluntarily hospitalized when my son was four and haven’t returned to work since.

If couples fights are constantly bringing you down, there are some important questions to ask yourself that can help you learn how to resolve conflict and improve communication with your partner.
Read more
Mind Talk