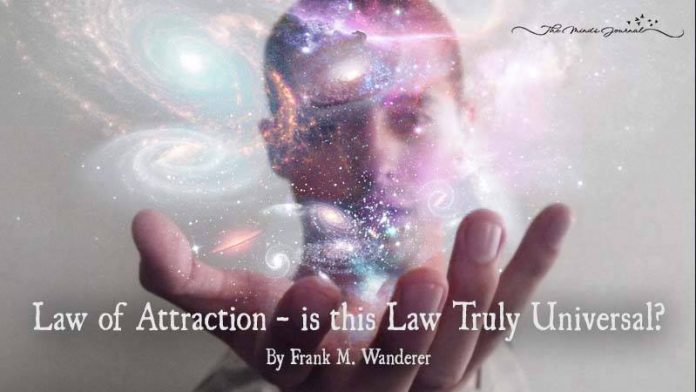 Law Of Attraction – Is This Law Truly Universal?

What is Awaiting Behind the Gate?

That may not even be the right question; the right question is more likely that “Why do we need a gate at all?”  Who created it, and who prevents us from reaching the things that are so important for us, e. g. freedom?

A glance at our rush reveals that there is the intention of becoming something else behind it. The idea that we need to become something else than what we are is, however, not our own. We did not invent it, it was handed down to us in the society we were born into.

Our parents and later various teachers did not accept us the way we were. From the earliest times, they try to shape us to match their expectations and those of the entire society.

In order to match us into their molding forms, our parents and teachers created the heavy iron gate, and kept us away from everything that, in our infantile life, did not match their expectations.

That is how in the course of years we become mere imitations instead of independent human beings. That is how the liberty of developing our individuality according to our own rules is taken away from us.

And now, with the master key of the law of attraction, the iron gate is opened, and we may regain our lost freedom. We take a deep breath and believe that the whole world has opened up for us, we have possibilities that we have only been dreaming of previously.

The question is, what we can do with the freedom? Alas, the general experience is that most Wanderers begin to use that freedom as imitations only, for purposes our parents and teachers used to believe was freedom. In this way, we attract to us everything that was previously in short supply to us: money, power and a variety of entertainment. We achieve the goals we have been pursuing so far.

But this route, as we have seen before, leads us at best to the recognition of the futility of this freedom. Only the realization of the senselessness of the daily struggle in the world of the shapes and forms brings us real freedom, which is the freedom of the termination of identification with shapes and forms.

Law of Oneness is the Real Master Key

Once we have realized that the master key and the iron gate are not real, what can we do? How can we find truth? Is there a real master key at all, to open the gate of Reality?

Yes, that master key does exist, and it is identical with our real state of existence. This is the state of Pure Consciousness, free of identifications, the state of the Witnessing Presence.

The glue that lulls that Pure Consciousness and binds it to the shapes and forms is the activity of the mind. The mind judges and categorizes everybody and everything, dividing them into good, bad and neutral categories. If we condemn or like something or someone, we have identitifed with our opinion and the emotions coming with it. When we find something neutral, we put it in the ”it might come in handy later” box, which is also a way of identification.

In the state of Witnessing Presence, whe we are contemplators, we are free of the desire to identify with thoughts and emotions. We no longer judge things, we no longer categorize, and do not struggle against thought and emotions. Instead, we observe them as witnesses when they appear, stay there for a while and then finally vanish. They do the dance of the forms and shapes in the space of Consciousness that is in fact we are ourselves.