The 4 Types Of Intuitive Thinking 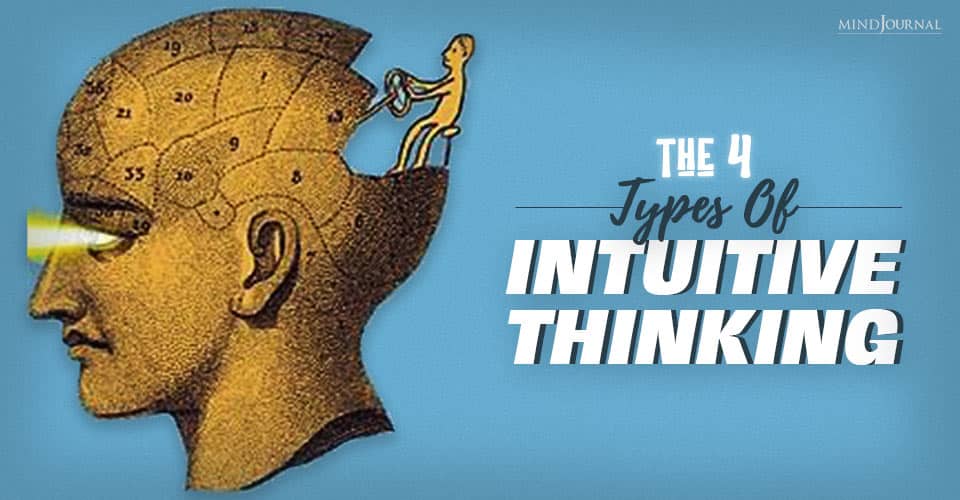 Mental Intuition is about finding an immediate answer to a problem, without analyzing it or giving it any rational reasoning. It’s very common in people with jobs that require quick decisions, like firefighters or bomb technicians, where an instant decision can make or break a situation.

This type of intuitive thinking means having the ability to overcome any personal difficulty or a state of personal crisis, without putting much mental effort into it. This is a form of self-care that copes and defends our own minds from negative impacts and influences.

Read How To Use Your Intuition To Find Your Soulmate

Spiritual Intuition has to do with states of ‘enlightenment’, ‘revelations’ and ‘illumination’. They’re more of an experience than a fact. It sheds light on the exposure and connection to higher awareness and power which has its own explanations and set of perceptions.

An astute example of that can be the facets of Buddhism and how it channels this very thinking into the organism of the religion. It talks about this kind of intuition more than anyone else, which has given it a mystical quality.

The very concept of Intuition and its thinking has always been and still is, a mysterious one. Even after scientific interventions and explanations ( to an extent), there’s a vast majority left which is still unexplained, as to how a phenomenon so speculative and random is so much correct and more often than not even goes on to make sense, irrespective of age, maturity or mental state.

Probably, the mystery will unfold with time and the answers we get will baffle us even more than intuition as a process itself.

Forever in awe of mountains and its call. On my way to fight the fights and reach the heights.View Author posts