This is just one example of many such thoughts I had. I believed in all of these sudden scary thoughts and felt totally unable to stop them.

Thoughts of Harming Someone

Over the past few years, whilst helping other people address their chronic anxiety issues, I have seen many who have experienced the most appalling thoughts that have scared them terribly. Common intrusive thoughts with high anxiety levels are that you may hurt yourself or others, especially those close to you. Several ladies have expressed their suitability as mothers because they have had a fleeting thought of harming their children in some way. They believe that if they are capable of thinking these thoughts, then they must be capable of carrying out the suggestions of them. One lady was so scared that she asked her husband to take care of the kids as much as possible, and she kept her distance.

I must say at this point, that it is highly unlikely you would ever carry out an action related to these kinds of thoughts and it doesn’t mean you are going crazy.

You may actually love your children so much and be feeling worried about your ability to cope. A thought about harming your children could purely be centered around your love for them and a feeling of helplessness. 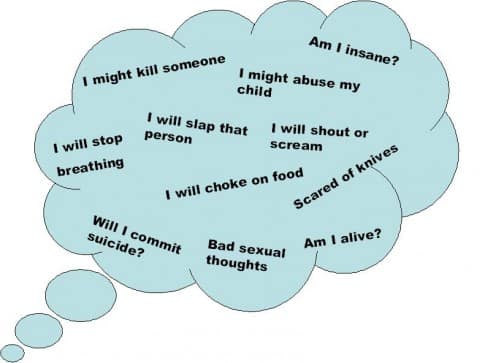 I have heard people mention many different but equally disturbing thoughts. Some of the worst ones are attached to a depersonalized or derealized state, posing the question of one’s very existence. The unreality felt at times by those who are very sensitized by anxiety, throw sufferers completely off balance.

Other common intrusive thoughts are about:

Some of the thoughts can seem obsessional-compulsive in nature and can cause ritualistic behaviors in order to prevent something awful from happening.

Most of all anxiety sufferers are bewildered as to why they should be feeling unreal and why they are having strange thoughts in the first place. Many can’t believe for a moment that it is only anxiety.

Why Do We Have Intrusive Thoughts

Chronic high levels of anxiety produce a steady stream or rushes of adrenaline. The pouring out of adrenaline keeps us on high alert preparing us to fight or run away. When there is nothing legitimate to run away from, the energy produced by adrenaline has nowhere to go. Have you seen how nervous people wring their hands, talk fast, rush around, play with their hair, and move around in their seats? This is all about having excess physical and mental energy. They have all this energy and yet they feel exhausted. It is a vicious cycle causing a burnout.

Remember how I said that people who don’t have an anxiety problem get strange intrusive thoughts and dismiss them immediately? These people are not on high alert.

A person with high levels of anxiety is, without realizing it, actually ready and waiting to jump on anything and everything, be it mental or physical in manifestation. The shock of the thought is much more pronounced because these people are highly sensitive, emotional and therefore highly open to suggestion. It knocks them for six!

After the initial shock of the thought, the next thing they will do is dwell on that thought and question it. Rumination is an enemy to an anxiety sufferer. They will analyze it and by analyzing it will give it profound importance. The whole episode is then stored in memory ready to spring out again at any time. In the anxious state, you have performed a reaction that is “anxious”. The next time that the thought arises, the same reaction will follow as if by instinct. In many ways, it is learned behavior. So you have a cycle of:

Intrusive thoughts will go away when the anxiety is addressed.

How to Cope with Intrusive Thoughts

Thought for the day

Thoughts are words in the mind. Words strung together with letters. Thoughts conjure up pictures and therefore scenarios when you attach meaning to the words. In the mind of an anxiety sufferer, these scenarios are usually negative. Thoughts only have the meaning and importance that you give them.

Flip Side Of A Narcissist’s Point Of View

Fight For Her Dignity