In Therapy, My Therapist And I Were Talking About My Own Feelings Of Self Worth In Relationships 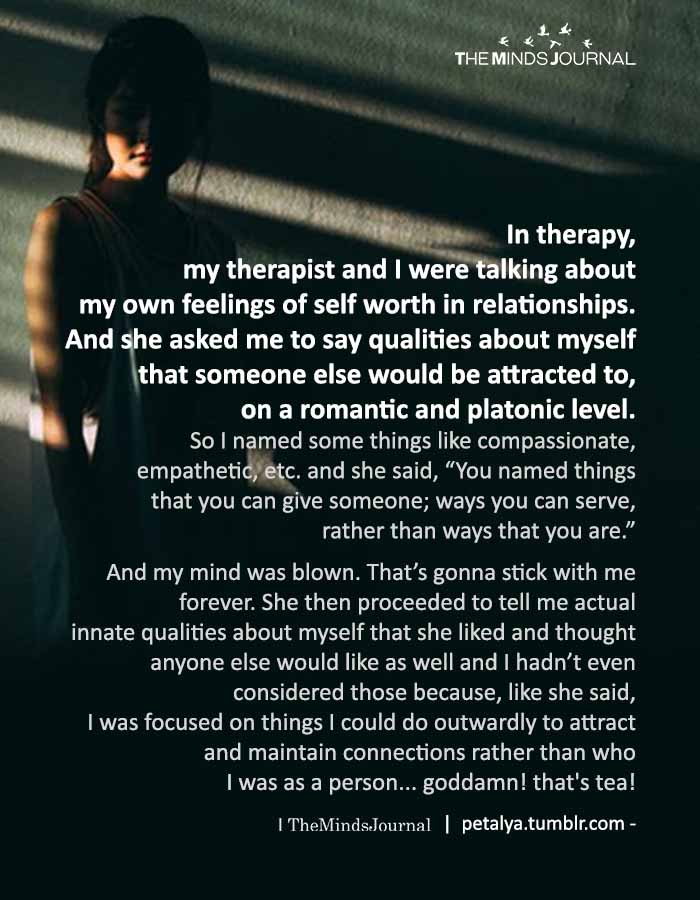 In therapy, my therapist and I were talking about my own feelings of self-worth in relationships. And she asked me to say qualities about myself that someone else would be attracted to, on a romantic and platonic level. So I named some things like compassionate, empathetic, etc. and she said, “You named things that you can give someone; ways you can serve, rather than ways that you are.”

And y’all… my mind was blown. That’s gonna stick with me forever. She then proceeded to tell me actual innate qualities about myself that she liked and thought anyone else would like as well and I hadn’t even considered those because, like she said, I was focused on things I could do outwardly to attract and maintain connections rather than who I was as a person… goddamn! that’s tea!

Whimsical and romantic by nature, I am always on the lookout for the next crazy adventure I can enjoy! I believe that life is not meant to be serious all of the time, and we should have fun as much as we can. Also, writing has always been more than a hobby for me.View Author posts

You Are Allowed To Prioritize

You are allowed to do what makes YOU happy.

Practice Telling Yourself I’am Better Than

Self love is the best kind of love.

There Is A Difference Between Doing Well And Feeling Well

It’s important to live your life, and not just exist in it.

Be proud of yourself for what you’ve achieved. You deserve every bit of it.

It’s Important To Give People The Real You

Who is meant to stay, will always stay. No matter what.

Empathy Without Boundaries Is Self Destruction

Stop moving your boundaries to accomodate others!