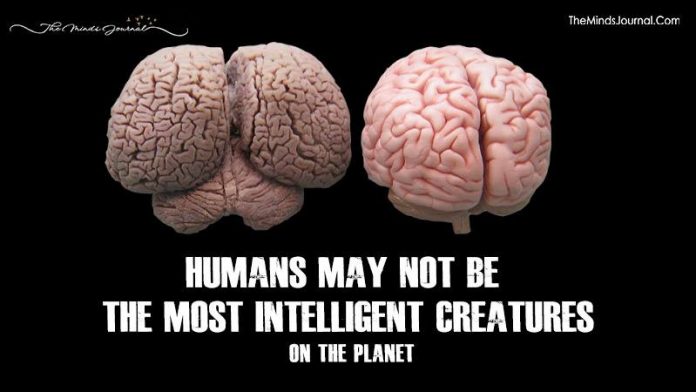 Humans May Not Be the Most Intelligent Creatures on the Planet

Social Darwinism, a myth, was an effort to use science to validate the behavior of employing superior weaponry to oppress other humans.

Though we owe much respect to western science we must also understand the cultural and religious backdrop from which this discipline emerged. We must also be willing to explore the assumptions within science if we are to evolve it.

Rupert Sheldrake attempted to do this during a TED Talk entitled, The Science Delusion and his presentation were banned. This is not to say that Sheldrake is right and all of the science is wrong, that is too simplistic.

It is merely an opportunity to open a dialogue about assumptions within science that the scientific community may or may not be willing to consider. I mention it in the context of considering the humble notion that humans may not possess the highest form of intelligence on the planet.

If for no other reason than amusement, just open your mind and consider…

It is fascinating to reflect on mammals like us who have been on the planet a whole lot longer than us who also have larger brains than us. We, humans, pride ourselves on technology, on creating tools, gadgets, and machines.

Of course, it is easy to consider that intelligence is based on technology. Then there is the idea of emotional intelligence which acknowledges a form of intelligence which is internal, can not be easily measured empirically but plays a major role in the success of an individual.

Intuition, compassion, empathy are usually considered feelings, but these are skills, non-physical tools that we can use to ascend the social ladder.

Meditation could also be considered a non-physical tool that changes our biology, reduces stress and opens the mind. We may be at the very beginning of understanding that tools do not need to be physical or easily measurable by traditional science in order to be valuable.

We willingly accept the idea of intelligence in a life-form only if the intelligence displayed is on the same evolutionary wavelength as our own. The technology automatically indicates intelligence.

This makes it very difficult for us to comprehend intelligent non-manipulative beings whose evolutionary history featured ample food supplies and an absence of fear from external dangers. – Paul Watson