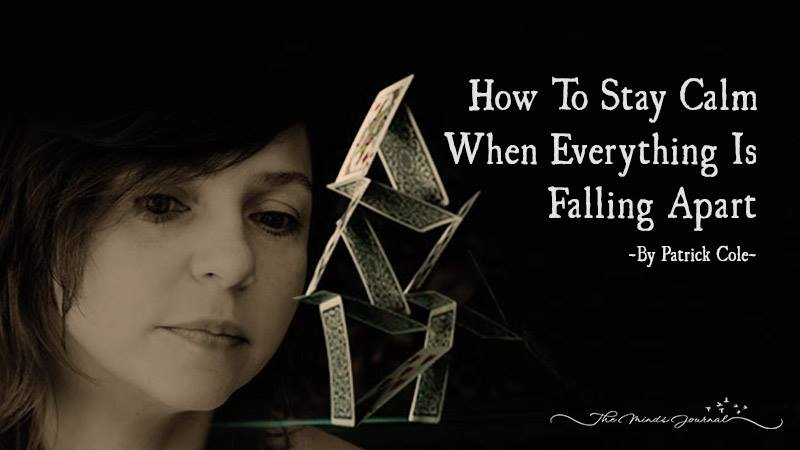 How To Stay Calm When Everything Is Falling Apart – Mind Talk

Sometimes life is like one long holiday. Everything just goes right, everybody is likable and your future looks bright and sunny. That is only sometimes. Other times life throws everything and your kitchen sink at you and you’re left dodging, running after the facts and trying to keep everything u in the air so that it doesn’t hit the ground in one big crash of crockery.

That’s what happened to me at the end of my bachelor years.

I’d been coasting along nicely at my university. I’d planned it out, so that I had about as much course work every semester as the other ones – except for the last one. I figured that by that time I would be good at this university thing and besides, if I finished the last semester there would be time to relax afterwards.

That’s when a little quirk in the bureaucracy got the best of me. I thought I’d done everything for my advanced statistics course. It turned out I hadn’t. And rather than having to only do the assignment that I hadn’t, I had to do the whole course again.

And seeing as I’d only passed the first time through the good graces of a good mate (he explained the numbers and in exchange I showed him the world beyond them) that was a big problem. It meant that suddenly my semester’s work went up by a whopping quarter!

It could have been the end of me. Instead, it turned into a new chapter in personal development.

I took a step back

Okay, I didn’t just take a step. I ran like hell. Then I drank. A lot. Because why be responsible and get a head start on your problems when you can go out and get absolutely pissed instead? That only lasted a little while (okay, three weeks and the only reason I stopped was because my liver said ‘Either you quit or I do’).

It was after that that I started putting things in perspective, however and on one fine dawn on a rooftop and nursing the last good-vintage bottle of prosecco at a party that nobody else knew we still had, I realized that I could either panic, or I could be a rational adult. I’d tried the panicking thing. It wasn’t really getting me anywhere. What could it hurt to at least try this rationality thing?

A lot of people said good things about it.

I made a plan

The courses had kindly provided me with everything that I actually needed to do for the semester. So I sat down and worked it all out. I started with the end goal, then I made sub goals, then I worked it out week by week and day by day.

I realized that if I didn’t leave things like the last minute like I normally did, it was hard work – including weekends –but it was possible. And so I taped my schedule to the fridge muttered angrily at it, took another sip from my prosecco bottle and went home (that actually happened – I had been drinking for three weeks).

My friends, impressed with my decision to take action, got it back to me and then I took the next step.

I spoke with my people

I didn’t hide that I was in trouble. Instead, I told everybody and I told them about my plan as well. I told my parents. They kindly informed me that I was an idiot and yelled at me for a bit (oh, unconditional love. Isn’t it a beautiful thing?). Then they got on board.

Then spoke to my professors. Now if there’s anything that I really advise, it’s that you communicate more with teachers. They can be mightily understanding if you come to them at the beginning of the semester or days before the assignments are due and are often very willing to help you out, if you show that you’re eager and willing to do what it takes.

For example, the statistics professor let me know that though I did have to resit the exam (damn!) if I just tweaked the assignments I’d written for her a little bit, she was fine with that (bonus!).

I put my head down

And finally, rather than focusing on the mountain that I was about to climb, I concentrated on completing the next step. After all, I had my plan, I’d discussed it with a bunch of people who had all supplied valuable input. There was no longer any reason to look up. And so I looked down and focused on getting each of the sub goals.

Your Horoscope for the New Moon in Pisces – 23 February...

Your Partner Can Control Your Brain, Science Explains