Have you ever thought about what goes through the mind of a man when he chooses the woman he wants to marry? What does he look for?

You may be incredibly sexy and great in bed. We may have sex with you both morning and night. And we may remember you fondly.

However, this is not enough to marry you. In fact, it has little, if nothing, to do with it.

The reason men marry women happens outside the bedroom. Now, you’re wondering how to get him to marry you?

Simple. We marry women who can make us better men.

Want to know more about what a man looks for in the woman they want to marry? Read 12 Signs She’s The Woman You Should Marry

It starts out when we notice that our car is cleaner and our house is cleaner. But then it goes deeper than that. A noble quality comes over us and we want to take care of you.

We want to know where you are. We care about the condition of your car and we make sure you have enough gas. Little things we never thought about become important.

We care about how you feel, not just how you look.

As a woman, you may be thinking, “That sounds great! How do I make it happen?”

The truth is there’s nothing you can do to make it happen. However, you can allow it to happen.

It’s energetic. The first and most important thing is that a man loves a woman who loves him, but not more than she loves herself. Some people call it confidence — but it goes deeper than that.

Confidence is what you can do; self-love is who you are.

The second key, which builds on the first, is allowing love to happen: You feel comfortable and worthy of being cared for not for what you do but for who you are.

Allowing love means when he checks on your car, you let him. When he wants to get you gas, you let him, rather than saying you can get it yourself.

For a man to become a better man, he needs the space and the opportunity to do so. In short, a man marries a woman who he believes makes life better — and even better, you allow it to happen.

Contrary to what most people think, men are actually very simple from the heart. The perfect woman for them is a woman who will always be there for him, take care of him, and also take care of yourself. So if you have someone like that in your life, hold them close and never let them go.

If you want to know more about what kind of woman a man chooses to marry, then check out this video below: 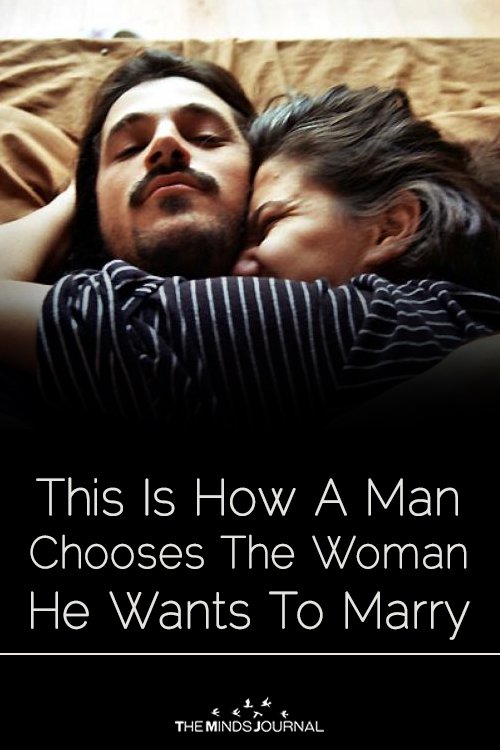