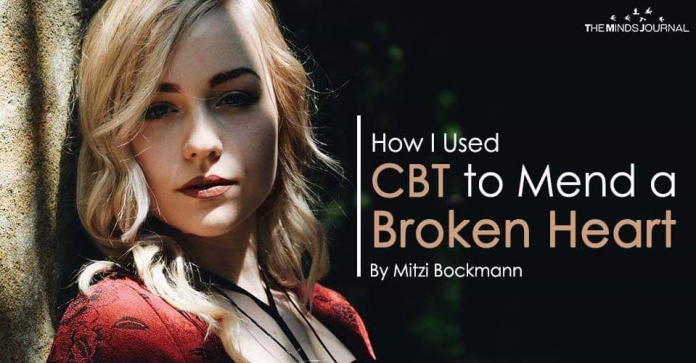 How I Used CBT to Mend a Broken Heart

And, so, I suffered, feeling shitty about myself and my future prospects. I recognized that the sadness was really a cover for the lack of self-worth that was really the problem.

So, take a look at the emotions that you are feeling about the feelings that you have. Are they what they seem to be? Dig a little deeper.

So, there I was, feeling rock bottom horrible about myself and not sure where to go from there.

CBT gave me some tools to work with in that it showed me how to reframe my negative thoughts about myself.

Instead of feeling bad about myself for letting him lead me on for so long, I worked to commend myself for having the strength to finally walk away. I recognized that not making me a priority was not because of me but because of how crazy his life was during the divorce. I also saw that HIS self-esteem was really low and that he probably didn’t feel good enough for ME so he pushed me away.

By reframing my negative thoughts, the thoughts that were dragging me down, I started to see that what happened wasn’t all my fault. Yes, I had spent more time waiting for him than was perhaps wise, but I DID get out. His lack of attention wasn’t because of ME but because of his life circumstances. And that, perhaps, I wasn’t such a loser and that another love might be out there for me!

I have never, ever met a woman going through a break up who didn’t blame herself for the whole thing. Either her man was happy to put the blame on her or she took it all on herself, unwittingly. Either way, blame for the end of a relationship is a heavy load to bear.

So, be easy on yourself. It wasn’t all your fault so don’t let him, or you, carry the load all by yourself. You will be amazed at how much lighter your feelings are if you can truly accept that it that break-up wasn’t all on you.