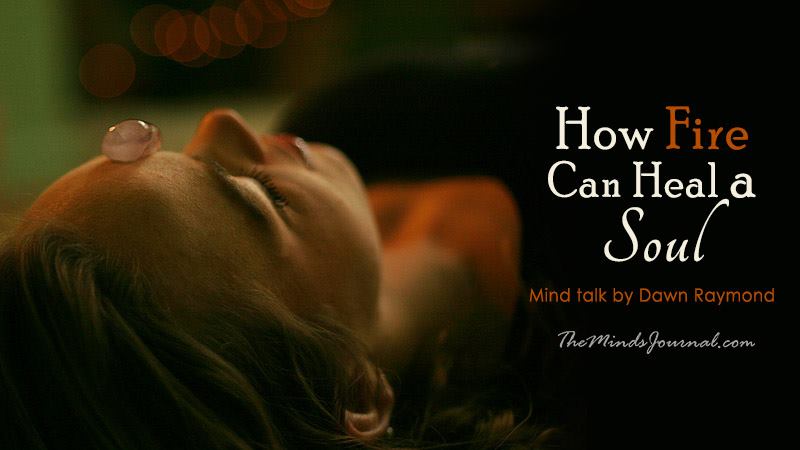 How Fire Can Heal A Soul – Mind Talk

Pinterest
Facebook
Linkedin
Twitter
ReddIt
Mix
Tumblr
WhatsApp
Email
Print
I am a licensed massage therapist, among a million other things.  Contrary to what one might think, I do not desire to go around touching people, like some sparkling Tinkerbell with magic dancing fingers (although I do love glitter).
I have not desired to heal the people I touch.  Help: yes. Heal: no.  To me, those are two separate things. Believing that I am some sort of healer– to me- just seemed completely arrogant, and frankly, arrogance just pisses me off.  So I avoided it.  I decided that it was silly to claim some power of the universe was ours to use as we saw fit. It all seemed pretty artificial and fabricated to me because I figured some people would just be claiming the mysterious “healer” title to boost their needy ego. That’s not my deal.
And then I had “the experience”.  I found myself betrayed by what I thought was a dear friend and plunged into this dark personal pit that I didn’t know if I could climb out of. It wasn’t the worst thing that could have happened, but even on this non-grand scale, I was shocked that people could use up and discard others with such breezy, gleeful ease.  I think everyone gets a trip around Betrayal Block at some point in their lives, and I had to make myself see it for what it ended up being: a big, steaming pile of worthless, emotional refuse, and it was up to me to take the trash out.
I emerged from the ashes with some new insight into healing.  I read voraciously on perplexing people, and it was like a hospital for my soul. Most of the words were from people who had tread the same turbulent waters that I had- and worse. Much worse.  There was such wisdom and freedom in learning from what others had to say.  It was like a salve on a fresh wound. Healing.
Sometimes, the things that happen to us force us to make some big choices, but more than that, they help us to see our options more clearly. My “betrayal” (a light an d temporary thing, I now see with much clarity) gave me a tremendous amount of clarity about things dark and light. The side I’ve chosen became clear to me as I was surfing the web looking for people who needed to hear the truth that there is victory on the other side of the valley. I was using the internet to help others, not to exploit them, as some others might, and dang if that didn’t make the whole rotten trip worth it.  As it turns out, difficult times are just a catalyst for our personal evolution, and that’s pretty cool.
We have a fire that burns in us, whether we know it or not, and it sparks onto those around us. It’s not always a flame that warms a chilled soul, it’s sometimes a blaze that scorches and inflicts pain.  The cool thing is, you get to choose. You can use your flame to bless or to curse.  To heal or to destroy.
So I realize that I really am a healer. I’ve chosen to use every tool at my disposal to create a healing space for others. I also use hope and heart to root you on, especially if we’ve walked in the same shoes. And when you are strong and have walked over those fiery coals to the other side, you will do the same.

You will be a healer.

Written by Dawn Raymond
Photo via flickr.com/photos/jlhopgood/ (editted)
[su_box title=”Get your Thoughts Published on our site” box_color=”#959675″]My Mind Talk Series, A series devoted to our readers. Does your Mind do a lot of thinking too ? Do you have questions to ask ? A Poem, A question, an article or any thought that wants to be shared. Pour them here. Click the Submit button and we will publish it on our Site. Why let that thought Sink ? Let it be free Write on.. 🙂 Let the Mind Talk Begin [/su_box]

Didn’t do the witches they… Read more »

The Blind Love No words were felt quite enough, All the explanations seemed tough. The things which had entangled me more,
Read more
Mind Talk

The Men In Uniform

Men In Uniform The sun was up early above the buzzing ground, The men walked past us with the roaring sound. Amazing synchrony of discipline and dignity
Read more
Mind Talk

Cotard's Syndrome She was fast asleep, amidst layers of ivory tulle held together by a tight corset, porcelain skin glistening ghostly in the dim light,
Read more