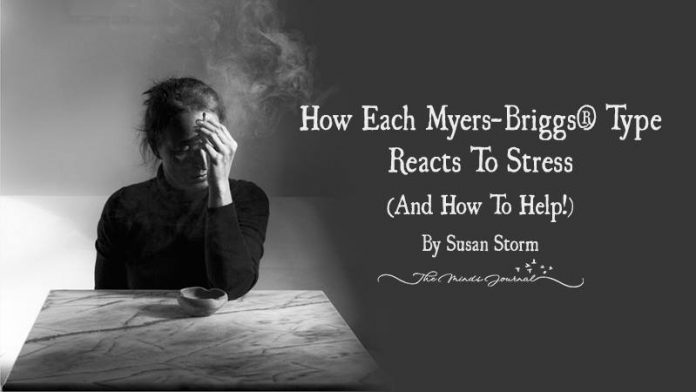 HOW EACH MYERS-BRIGGS® TYPE REACTS TO STRESS (AND HOW TO HELP!)

Pinterest
Facebook
Linkedin
Twitter
ReddIt
Tumblr
WhatsApp
Email
Print
– Give them a change of scenery. Let them spend some time outdoors.
– Encourage them to exercise (without making it a dig at their weight or health).
– Watch a comedy with them, or engage them with some humor or lighthearted entertainment.
– Acknowledge how they feel.
– Let them talk it out.
– Remind them of their strengths and contributions.
– Don’t use logic to talk them out of stress.
– Don’t ignore them.
– Give them feedback. Talk about a similar situation you went through.
– Get them away from the environment or situation that is stressing them out.
– Give them an enjoyable book to read, or a lighthearted movie to watch.

What stresses out an ESTP:

– Rigidly enforced rules
– Having to plan far into the future
– Feeling out of control
– Being asked to complete tasks without detailed directions or processes
– Large amounts of book work, theory, or writing
– Being forced to make commitments or plans before they’re ready
– Being forced to make decisions or eliminate options before they’re ready
– Having to spend a lot of time following someone else’s rules or schedule
– Being in a situation where they have to use a lot of theoretical or intuitive concepts
– Being around people who are excessively serious

When faced with stress, ESTPs tend to feel empty or hollow inside. Their first impulse may be to seek revenge for whatever has caused them stress. They may do this by mocking other people’s values, or becoming increasingly anti-social and disdainful of others. If they are in a state of chronic stress, they may fall into the grip of their inferior function, introverted intuition, and become a “dramatizer”. When this happens, they may do things that are completely out of character for them. They may lose their naturally easy going, agreeable character and begin to have fearful fantasies of the future, ideas of impending doom swirling in their minds. They may begin to assign big meaning to small occurrences, and become preoccupied with the meaning of life and the future of mankind and the universe in a way that is usually filled with gloom and disillusionment.

How to help an ESTP that is experiencing stress:

– Give them space initially or directly after the event.
– Listen to them. Understand that they will likely be irrational.
– Don’t tell them how to fix it. This will only make them feel more helpless.
– Give gentle affirmations or encouragement
– Help them sort out their priorities, paying careful attention to their feelings.

What stresses out an ISTP:

– Tight restrictions and a rigid structure.
– Being in controlling relationships.
– Dealing with irrational people.
– Having to use theoretical or intuitive concepts for a prolonged period.
– Being in an emotionally charged environment.
– Lack of alone time. Too much extraverting.
– Being in a non-challenging work environment.
– Doing repetitive, mundane tasks.
– Not having their personal values respected or validated.

When ISTPs experience an overload of stress, they may try to respond by lashing out against whatever is causing it. They may violate rules and regulations that they feel are controlling them; they may feel a need to “get even”. They may become emotionally obsessed with logic and proving a point, while losing track of organization and losing objects or misplacing them. In cases of chronic stress, ISTPs may fall into the grip of their inferior function, extraverted feeling, and become very emotive. They will become hypersensitive about their relationships with others and misinterpret small, insignificant details into the belief that others dislike or hate them. They may become uncharacteristically emotional and/or bitter towards others.

How to help an ISTP experiencing stress:

– Give them alone time and space.
– Excuse them from some of their responsibilities.
– Let them “get away” from everything.
– Don’t ask how they feel.
– Encourage them to exercise.
– Let them read a mystery novel or do something that engages light problem solving.
– Forgive their out-of-character behavior.

What stresses out an ISFP:

– Rigid structure and rules
– Having to violate their deeply held values
– Not enough alone time. Too much extraverting.
– Too many demands or obligations.
– Having to deal with excessive data
– Long-term planning
– Criticism
– Lack of appreciation from others
– Feeling that they are about to lose something (relationship/task, etc,..)

When under stress, ISFPs can often become passive aggressive, restless, and defiant. If stress continues to build, ISFPs may become self-destructive and careless of their own well-being in an effort to restore excitement or affirmation in their life. If an ISFP is in a state of chronic stress, they may fall into the grip of their inferior function, extraverted thinking, and become “the criticizer”. They may be harsh and critical of others, obsessing over their mistakes, and others incompetence. They may have an intense urge to fix perceived problems or right wrongs, but this can often worsen the situation.

How to help an ISFP experiencing stress:

– Give them some time alone to process their feelings and thoughts
– Validate their feelings, and listen to them. Female ISFPs are often ready to talk sooner about their feelings than male ISFPs
– Remind them of their strengths.
– Don’t give them advice. It won’t help when they’re stressed.
– Don’t try to reason with them or be logical. Just be patient, calm, and affirming.
– Only after they’ve calmed down from the stress ask if they’d like any help with solutions.

Susan Stormhttp://psychologyjunkie.com
Susan Storm is an MBTI, Certified Practitioner, freelance writer, and psychology enthusiast. She has been avidly studying psychology for over ten years and loves to engage with a variety of people and personalities to understand them better. Her major areas of interest are personality psychology, child psychology, and developmental psychology.
-Adverts-

“This is why I hate people,” said you, followed by intense internal screaming and questioning yourself why you are there in the first place. “Why the hell are you doing that?” you thought to yourself, “Why, just why?”
Read more
wpDiscuz
1
0
Would love your thoughts, please comment.x
()
x
| Reply