How To Get Commitment From A Man Without Asking For It 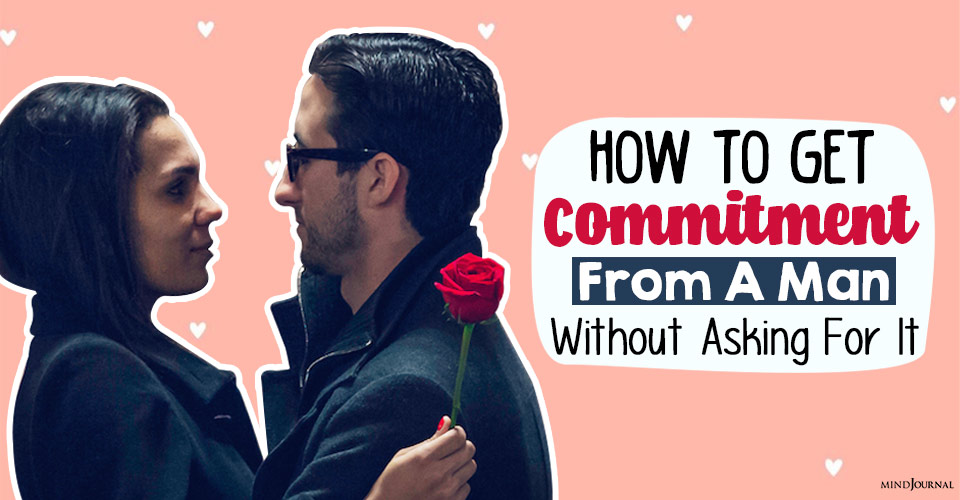 Men are actually quite great at commitment– after all, you can’t go halfway when you’re committing to killing that wild boar for dinner. Or the modern version– acing that promotion to bring home more bacon.

What men aren’t excited about is the idea of making a bad deal. And you shouldn’t be either.

Let’s empathize with men for a minute.

Men don’t grow up getting happy family fantasies shoved down their throats. They aren’t brought up to believe that relationships are something to strive for, per se– even though men are the ultimate romantics. One of the things I appreciate about men is how they are able to compartmentalize their relationships so that they can focus on other things.

Because masculine energy is also about focus. That’s why, if a man commits to marriage, they’re going to focus on getting that done so they can go out and get other things done.

And that “end” is securing their future with someone they love and want to keep around. It’s about preventing you from walking out and being vulnerable to someone else.

Because having you in his life will be better than losing you.

Men don’t get married because they feel like they should or they “owe” it to the woman. You don’t add up enough girl scout merit badges and earn commitment because you were a great girlfriend and partner.

And that’s how lots of women approach commitment.

There’s An Urgency, A Toe-Tapping “Let’s Not Waste Time Here” Hurry To Get Commitment From A Man.

The clock is ticking on having healthy babies lots of the time (if babies are your idea of a good time). That biological urgency is a real thing that men will never understand since they make sperm (maybe not great swimmers but still…) until they croak at 104.

Related: 5 Secret Things A Guy Needs Before He’ll Commit and start to fall in love with you

What do I mean by this?

Men make a commitment to prevent loss. Either immediate loss, like “she’s walking out the door and that’s it.” Or. the loss a man knows he’ll face if he doesn’t meet your standards and this causes you to change your mind about him and the relationship. So if you’re there, breathing down his neck, trying to get him to commit, you’re doing it wrong.

You will not coerce a commitment from a man using force. You decree it with your standards.