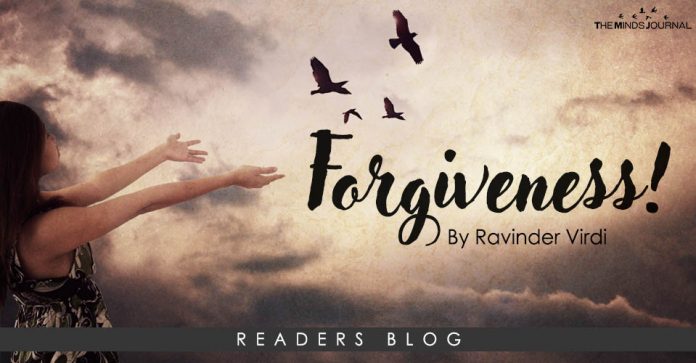 The quest to know about “Forgiveness” has been a long awaited story by my followers and friends. While I observed a lot and read a lot from history to modern times. Today I am confident about few Myths that exist in the process to “Forgiveness”

According to Bible “forgive” means to leave (something or someone) alone, to allow (an action), to leave, to send away, to desert or abandon, and even to divorce. Psychologists generally define forgiveness as a conscious, deliberate decision to release feelings of resentment or vengeance toward a person or group who has harmed you, regardless of whether they actually deserve your forgiveness. Forgiveness does not mean forgetting, nor does it mean condoning or excusing offenses.

Here are popular Myths listed and what Forgiveness does not mean:

Myth #1 : The only assumption I made to myself while religiously and sometimes ritually practicing the art of Forgiveness is that the other will not repeat the sin. I thought the problem would not occur again as “Forgiving” would make the sinner a little better person.That’s not truth. Your forgiveness neither entitles the sinner to be better person nor it guarantees that he would not repeat it again.

Myth #2 : [Pretending that the offense never happened.] Forgiveness is reconciliation with sinner In The Bible – God forgave King David of serious sins, but he did not shield David from the consequences of his actions. God even had David’s sins recorded so that they are remembered today. Forgiveness is actually reconciliation with the situation and not with sinner. Popularly forgiveness means you let go the sinner and forget the situation so that it does not have any effect on you.

Myth #3 : Allowing others to take advantage of you. Suppose, for example, that you loan money to someone, but he wastes it and then cannot repay you as he had promised. He is very sorry and apologizes to you. You could choose to forgive him by not harboring resentment, not rehashing the matter with him continually, and perhaps even canceling the debt altogether. However, you might decide never to loan him any more money so that he/she does not take advantage of you

Myth #4 : Pardoning with no valid basis. Does not forgive people who are guilty of willful, malicious misdeed and who refuse to acknowledge their mistakes, change their ways, and do not apologize to those whom they have hurt. Such unrepentant ones do not deserve forgiveness.

Myth #5 : What if you are the victim of cruel mistreatment by someone who refuses to apologize or even admit to what he has done? While not excusing the error, you can refuse to be consumed with anger. Trust that you will bring the person to account. You can also take comfort in knowing that you will bring a time when you will no longer feel the deep pain or hurt that may burden you now.

Just as important as defining what forgiveness is, it is also important to understand what forgiveness is not. Experts who study or teach forgiveness make clear that when you forgive, you do not gloss over or deny the seriousness of an offense against you. Forgiveness does not mean forgetting, nor does it mean condoning or excusing offenses. Though forgiveness can help repair a damaged relationship, it doesn’t obligate you to reconcile with the person who harmed you, or release them from legal accountability.

Instead, forgiveness brings the forgiver peace of mind and frees him or her from corrosive anger. While there is some debate over whether forgiveness requires positive feelings toward the offender, experts agree that it at least involves letting go of deeply held negative feelings. In that way, it empowers you to recognize the pain you suffered without letting that pain define you, enabling you to heal and move on with your life.

We were able to Break Burden as below:

– To forgive does NOT mean that you condone wrongdoing.

– Reaching a place of true forgiveness is NOT about you deciding that what someone did is okay if it was not.

– Forgiving does NOT mean you have to forget (is that even possible?).

What forgiveness is : eliminating the negativity that results from hurt by letting go of emotional baggage.

Ravinder Virdi
Helping you get from where you are, to where you want to be is how I define my expertise in helping you dealing with life changes. Life coaching helps in an in-depth way that crosses all the contexts of your life. For example stress management, goal setting, and dealing with life changes are important in your personal life, your social life, and in public arenas. A life coach helps you, in just about any context, to do things like ... get unstuck, climb out of your box create healthy habits , have more fun ,unleash your creativity , improve your relationships ,connect to your life purpose and your inner passions , develop your leadership potential ,identify and reach your goals Helping you discover the answers you probably already have inside yourself. I may have strategies to help you to find resources in yourself, in your professional world, and in your community for the important answers you are looking for.
-Adverts-