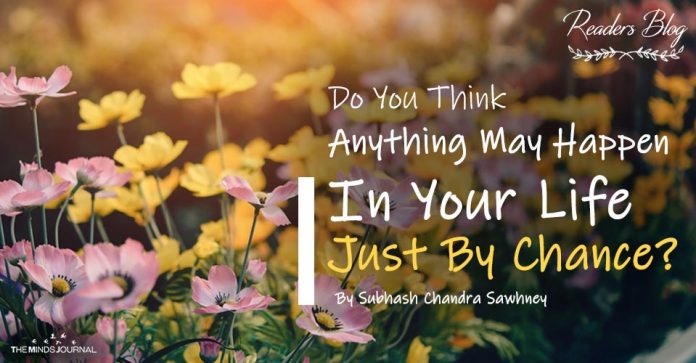 Do you think Anything May Happen In Your Life Just By Chance?

Is it not true that many a time even such things happen in our life that makes us squirmed about the reason why such things should have happened, at all?

Whenever any such thing happens in our life we tend to think that such things could have happened just “by chance” or, maybe, the reason for their happening is hidden in our “past-life karmas” and we can’t know the reason simply because we don’t know “what sort of karmas we should have performed during our past life”?

Sounds éclat but who knows – if such things may be even having anything to do with our past life, at all?

No wonder it leaves a lot of room for us to explore, if not by virtue of the past-life karmas – what may be some such reason we may sustain scientifically to account for the occurrence of the things that leave us quite clueless about them.

For instance, let us spend some time thinking about what should have squirmed Mo Whyte so much to think of what should have led her to have been able to see the car of her ex-husband getting pulled into the rear of some new apartments, one night, when she should have been walking back home – as posted by her on her timeline, on Facebook.

Was it merely a matter of chance or whether it should have sequenced by some soul that would have liked her to have learnt about the place where he should have shifted after the divorce so that she avoided that road thereafter so as not to confront him to get a rebuff from him?

She could not resist thinking if any such soul should have thought of counselling her this way – surely that could have not been possible unless it should have been not only aware of the fact that she had divorced him, she should have also known that they had very vitreous relations that should have resulted in their divorce. So this soul would not have liked that she should ever have to undergo any such agony all over, once again.

Does it not construe that when our parents or friends die, there is every chance that their souls may be keeping a watch over the things that may be happening in our life till they do not get reincarnated, though we can’t see them?

But all the more, what rigged through her mind was how such a soul should have been able to have ensured the synchronicity of the two events – “when she should have rambled around that road” and “when her ex-husband, should have been parking the car”?

She would not have been able to see the car getting parked on the rear of that apartment had she got through that place even a minute too late or a minute too early.

More so, because the souls don’t wear any of the analogue-type of a watch on their body as we wear on our wrists.

The type of clock the souls may be using

It proves that when we die, the souls do not die.

They keep a tab on us and try to help us by manoeuvring such things, in our life.

It takes me back to the days when I used to work in a public sector factory located deep in South India where we had a coterie of about four or five North Indian friends such as me and the Chief Medical Officer of the company – who used to mingle with each other almost on all occasions.

Though I happen to be an engineer I married a gynaecologist, way back in the year 1967. It so happened that within a few months of our marriage our company announced some vacancies of doctors in its hospital.