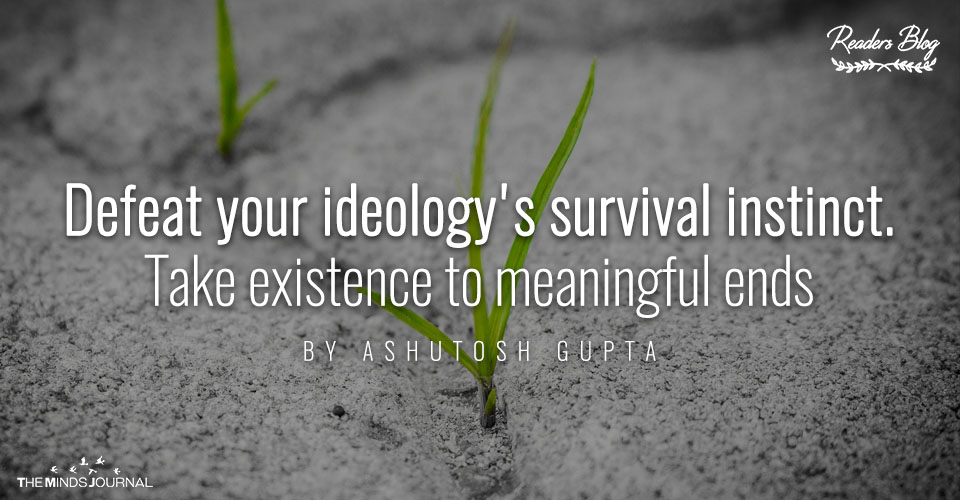 Be a crow, be a cuckoo, be a squirrel, be everything. Defeat your survival instinct and identify your existence with every dimension of life. Now that I have those metaphors off my chest, it’s time I make some effort to elucidate.

So, what’s wrong in identifying our existence with merely one or two dimensions of life? Do we become more prone to our survival instinct in doing so?

It’s a myth that our survival instinct impels us for food and material alone, and that once our stomachs and pockets find peace, it takes a back seat.

Once we are stable or satisfied materially, we begin to identify our existence with some other dimension or aspect of life, and with that our survival instinct starts lurking around this newfound identification, waiting to pounce on it.

Think of an environmentalist who identifies his existence with nature’s flora. If he doesn’t identify further, he starts fighting for his identification’s survival. He pushes the pendulum way too far and develops resistance to balanced reasoning. He ends up opening a front even against an ounce of capitalism or an inch of development.

Think of a feminist who only identifies her existence with gender equality. She too pushes the pendulum to extremes and functions just for the survival of her identification, trying to nitpick, seeing even non-discriminatory remarks with discriminatory lenses and taking every single judgment as an attack on her womanhood.

Think of a nationalist or a liberal ideologue in this light. Same story. He tethers his existence with a single identity, becoming uncompromising and an absolute desperate. His survival instinct makes him gather an army, an army of ideologues, who use their swords and arrows to majority their insecurities.

So how to fight this survival instinct, this termite?

Make your existence rich with a multitude of identifications. Keep moving back and forth, to and fro between different identifications. Don’t give your survival instinct that breathing space.

Live with one identification for a while and then move to another, and gradually take each one of them to a meaningful end.

For the environmentalist, planting hundreds of trees on a stretch of land can bring that meaningful end. Just like how Saalumarada Thimmakka aka “Tree Woman” did it. She planted over 400 trees over a stretch of 4 km between Hulikal and Kundur in the Bengaluru rural district. Saalumarada and her husband started with planting banyan saplings, and today she is a Padma awardee. She didn’t have to open a front against the establishment.

The meaningful end to feminism is coexistence and not the domination of one gender over the other. Women are intrigued by the struggle of feminism but men are intrigued by the romance of it. Therefore, the feminist can identify with men’s’ perspective of feminism. This coexistence of romance and struggle can make her outlook more balanced, less rigid, and resistive to her survival instinct.

For the nationalist, identifying with subcultures can lead him to that meaningful end. Isolation and utter ignorance of different cultures or ways of life make people paint everyone with the same color. Some use the color of nationalism, to create a false idea of uniformity for themselves and validate their ignorance.
Nationalism is about addressing the pluralism of the land in one voice when needed. Therefore, accepting pluralism is the essence of a nationalist. Just remember this. The finest of humans on earth will always be found fusing one resplendent culture with another to achieve what the shreds of art so dearly long for, by being both storytellers and listeners at once.

Existence is not about self-righteous, ideological, or moral flights. It scatters into streams, where one stream outlasts the other, eventually halts and dies. Much like water, that breaks and scampers in different directions when spilled on a gravelly road, and then ceases and evaporates.