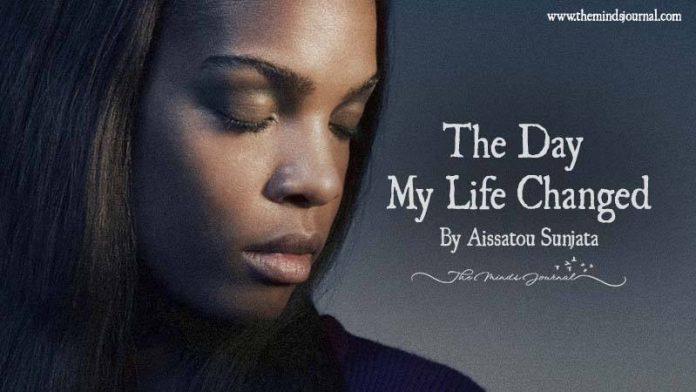 The Day My Life Changed

My journey many years ago, began when I started my day as a United States Army soldier on maternity leave, a wife of a fellow soldier and literally a brand new mother. My day would not, however, end finding me the same, nor would my life ever again be the same. My daughter was less than a month old at the time of her daddy’s death. We were getting ready to go to the lake, our first family outing since my giving birth to Nikiya. I can still remember when I returned home from the hospital how my husband surprised me. My daughter in my arms, my husband surprised me with a rocking chair he had purchased while I was in the hospital and hid in our bedroom closet.  I can still close my eyes and hear him yell from the bedroom for me to come to him. Don’t mind sharing I was a little startled and moving slowly not very happy at being summoned so soon after returning home and still not healed or settled in being a mother. As I gingerly rose and walked slowly to the doorway, I saw the most beautiful wooden rocking chair. He remembered. Months earlier, while we were still musing over what gender, possible name of our still unborn and unknown gender of our child, I told him how I dreamed of rocking our baby in my arms in a wooden rocking chair. A passing thought to me as it got closer to my delivery date. Yet, my husband remembered and there it was waiting for us. I was beyond thrilled at my homecoming present.

The next day, Sunday, we had planned to go to the lake. Alexander was scheduled to return to being in uniform and no longer on leave the following Monday. Our final full day together with our new daughter, or so I thought. Also, It would be our first and last time together without being in our uniforms together as we served in two different companies on base. We seldom, while in our military uniforms were in each other’s company until it was time for us to return home. We were going to go to the lake with another couple. They also had a daughter who was older than my newborn. We met at their apartment. Alexander decided he and J., his friend, and fellow comrade would go get gas for our Vega wagon before we went to the lake. I was angry! I thought he should wait until all of us were in the car and we could get gas on the way. He thought otherwise. I was so angry, I did not say goodbye to him; did not tell him I loved him; did not give him an embrace and kiss before he left. For a brief second, though, as he was headed towards the door, a second of extreme panic came struck me; just for an instant. It did not last long enough for me to understand it, do anything or say anything. For many years, and to this day, I think of it was a premonition; wish I could have recognized and told him not to leave me, or be careful – a regret, which at times still haunts me.

Hours later, it seemed to have been taking a long time for Alexander and J. to return from getting gas. At some point, my friend and I heard a knock on the door. I held Nikki in my arms. A police officer was at the door; he asked for me by name. He told me my husband had been involved in an altercation and requested I accompany him. I did not know where but thought perhaps my husband was injured. He was In the hospital and we were going so I could be with him. Still, with Nikiya in my arms, I proceeded to quickly get her ready to go. However, the police officer said she might not be able to accompany me. I thought Alexander was hurt and I was going to the hospital to be with him. I decided to leave Nikki with my friend (wife of J. with whom Alexander went to get gas). We ended up not going to the hospital as I thought, instead we ended up at the police station.

After many hours sitting outside an interrogation room, I was told my husband was deceased. I would not find out any details until his friend, J., who was in the automobile with him told me what happened the next day. My husband was wrongfully shot and killed by a police officer. I still remember how that morning, I was known as a U.S. Army soldier, wife, new mother. By the end of that day so many years ago, I became a soldier, single mother, and military widow. Today, It was not easy. Last couple years, although so many years ago, each knowledge of someone dying by way of an officer’s bullet threw me into what felt like an endless tailspin of reliving so many years ago. I had to constantly remind myself each time where I am in the continuum of what seemed like an ever growing club, I have become so many years later a survivor!