Coping with the Untimely Death of a Friend. 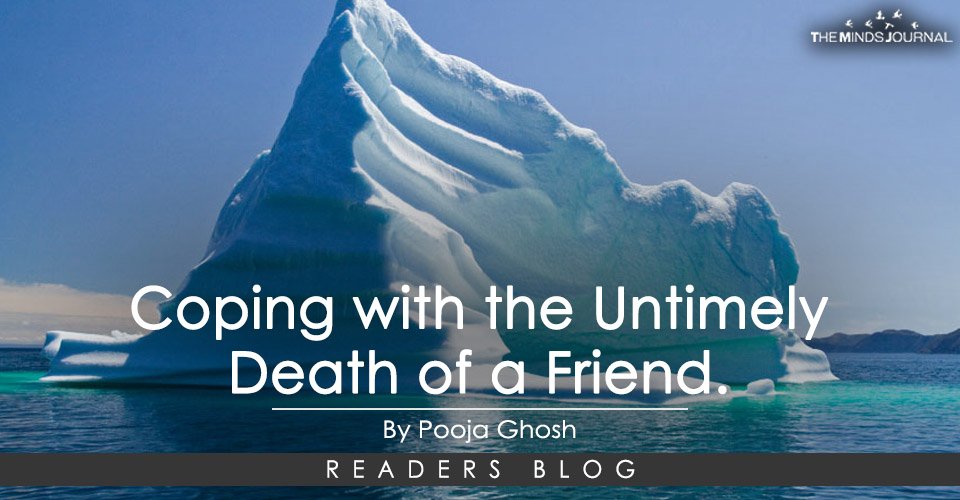 Day1– HE was admitted to the hospital, put on life support right away.

Day2– HE was unresponsive, with a damaged brain stem.

Day3– HIS organs had been donated.

There wasn’t much time before, but now, there was so much of it.

I had often contemplated how, by turn, each of my friends will walk out this world. The rest of us (then) wrinkly lot will dwell in the memories. But I was in my late twenties, slaving in a beautiful yet toxic workplace to pay my bills and build my skills, when it began. Real world stuff, you know.

My group of friends is highly diasporic. Catching up for a coffee doesn’t happen enough. HE literally dropped dead, far from us. It hurt because, we couldn’t feel all of it in one swift motion, unlike HIM. From various geographical points, calls came in, as we tried to make sense of it. HIS friend. HIS childhood love. HIS classmate. HE was everywhere, yet nowhere.

Maybe stress, the doctors had said. It could have been anything.

There was a  funeral of sorts, far from his home. Some friends and some parents of friends that had known him. We shared fond memories. The parents spoke of what they thought happens after death, with an edge of authority. We nodded. We lauded a few cancer survivors among us. Then the parents vented a bit about the clinical approach of health insurance companies towards death.

My friends and I confessed our work keeps us busy. We neglect our health. We don’t share our problems as friends should. We didn’t know why, but I think we did. We liked to pretend we’d always be young and healthy. The world wouldn’t corrupt us- we wouldn’t stand that.

The snacks arrived. HIS best friend never did. We discussed, as we penned good wishes on a huge board for HIS parents, how optimistic the friend had been till the end. And then, radio silence. He was flying out to Spain the same night, to start a new life. Maybe, that’s why he wasn’t here.

Mourning was easy, living in a room in an apartment of seven faceless people, everyone locked up in their rooms.

I buried my face in the pillow, crying, wondering.

HE was gone. We were still here.

But were we really here- because we had no time for friends and all we did was work fifteen hours and come home exhausted to this little hole, to binge-watch some series and then sleep, dreaming about the deadlines at work, feeling the jitters, but no complains of course, the money was good and so what if people at work were jerks, not everyone’s the same as you…

But HE was gone. And we were still here, looping our thoughts in a little coffin.

Outside my window a vast expanse of the Marina spread out. Skyscrapers, lakes and lies. The most beautiful part of the city, where all the validation exists, all of my own priviledge staring back at me.

What if one of us died in this pretty house full of faceless people, locked up in front of our computer screens? How long before anyone found out?

After a decade, we’ll look back at HIM, understanding how young he died. But in this moment, there was dignity in HIS death. We met up, mourned and knew, that his perfectly functioning organs breathed life into so many faceless people.

Did we dare to give ourselves the same dignity while alive? Why not? Were we guilty of being alive? Did we deserve any less than the dead? Were we misusing our privilege to live, by remembering the dead?

‘Get on with life.’ How? It could have been me or anyone, but it was HIM.

The next morning, I read an interview of our company Director. How he came to work only after having breakfast with his family and ‘dropping his kids all the way to their classrooms’. I knew, he left on time everyday. I sat right outside his cabin. Did he even know how long we stayed, day after day, to enable him time with his family? Did it matter to him, when he made this choice?

HE was gone. But in HIS death, there was more beauty and wisdom that no-one could have taught me. Privilege and dignity belong to the living. They are not what we earn or where we live, but the choices we make to be who we are. The choices that may seem outrageous to many. Because that’s living. Living is not always peaceful and easy and that is the privilege of life. That is the privilege of choice. In death, we cannot choose.

HIS death mattered. It reminds me everyday of what we lost and all that we gained. Only if hadn’t cost him HIS life.