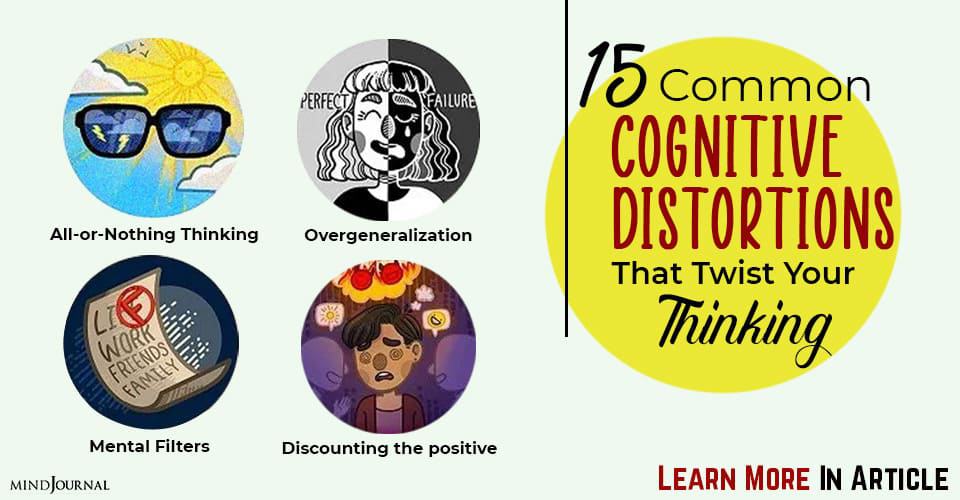 It is a type of thinking distortion where you assume that your emotional response or reaction to something establishes reality or proves as the truth, even though existing evidence may prove otherwise. It only results in an emotional truth that may contradict your perceptional truth. Emotional reasoning makes us believe that our emotions show the reality of experiences and events. This thinking error makes us form our own truth based on our feelings and emotions. For instance, you may feel guilty for expressing your anger and hence believe that you are a terrible person. However, in most cases, our emotions are not reliable judge of the truth. According to research, like some other cognitive distortions, emotional reasoning is also linked with anxiety or depression.

Making should or must statements is also considered as a type of thinking error. Cognitive distortions occur when you think about something regarding what must or should happen. These are typically self-defeating statements and are negative ways to talk to yourself. Should statements establish unrealistic standards which can negatively affect our sense of self and self-esteem, especially when we are unable to attain such standards. It can also lead to severe anxiety and panic attacks. Statements like “I should get the promotion,” or “I must have a healthy lifestyle,” set unnecessary rules and limit your behaviors. When you or someone else breaks these rules, it can make you feel stressed, frustrated, angry, or guilty. Although some people believe that should statement help them to stay focused and motivated, punishing yourself is not necessarily the best technique to achieve success. For instance, a person who believes that they “must” exercise regularly can feel guilt, shame, and upset when they miss out on a workout.

This is a type of overgeneralization where you attribute your own or someone else’s actions and behaviors to their character and personality instead of external factors or other attributes. You tend to label another person based on what they have done or their perceived character, even though their behavior may be determined by other factors. Labeling is one of the most common cognitive distortions that is based on making judgments about self or others and berates someone’s personality based on one single trait, behavior or event, which is mostly negative. If you believe someone is an alcoholic simply because they enjoy their drink, then you are labeling them as a drunkard.

This pattern of thinking makes you underestimate or misunderstand another person, which can affect relationships as this can be embarrassing and insulting for the person being labeled. Labeling is often biased and emotionally influenced. Labels often cause stress, hopelessness, hostility, frustration, anxiety, anger and poor self-esteem.

Read also: 3 Ways to Stop Judging Others By Their Body Image

Personalization & blame are some of the most common cognitive distortions. By taking things personally and blaming ourselves for the negative outcome even when it is not our fault, we increase or worsen our anxiety and depression. Personalization occurs when you blame yourself for things beyond your control. It prevents you from considering the fact that a number of different factors may be involved in the occurrence of a negative event or situation. Personalization also makes you falsely believe that reactions and responses from others are direct, personal attacks on you. You may also end up comparing yourself with others and take almost everything on a personal level. For instance, if your child fails an exam at school, you may blame yourself for not being a good parent by taking the outcome personally. Personalization & blame causes feelings of guilt,embarrassment, inadequacy and shame.

However, in certain cases the opposite thinking error can also occur where someone may blame only others for an undesirable outcome and fail to realize how they may have contributed to it. For example, if you have an unhealthy relationship, you may blame your partner for it without realizing how your toxic behavior is also at fault.