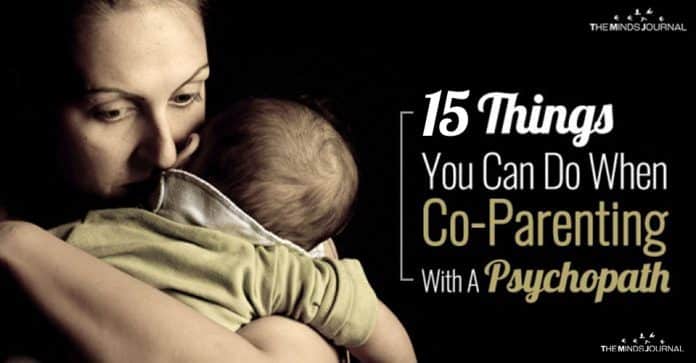 15 Things You Can Do When Co-Parenting With A Psychopath

3. Don’t Try To Reform Them

With studies showing that efforts at curing sociopaths with therapy do not bear fruit, it is best to leave them alone. They will only waste your time and use the sessions to sharpen their conning and conversational skills. You simply cannot cure a sociopath. Only a person who has some humanity in them can be reformed. Those devoid of a conscience are beyond reform.

A sociopath will attempt to drain you of everything you have including your money, emotional well being, power, reputation and status. If they see you as a threat to their deceitful lifestyle, they will come after you. They would want to see you become completely desolate. They might try to get your fired from your job and begin to bad mouth you to friends. Take any possible preemptive measures, but most importantly…know who YOU are and do your best to not let their evil ways bother you.

5. Keep It to Yourself

How to deal with a sociopath? Do not confront the sociopath about their behavior and your plan to cease interaction. This will only backfire on you.

Do not try to accuse them of any wrongdoing. They won’t respond well and it might turn into a fight. You will lose more than they will.

7. Hold Back Your Emotions

A sociopath wouldn’t want to hear about our feelings especially if what you feel reflects negatively on them. Avoid getting emotional whenever you are in a confrontation with them. However, if they feel wronged by you, show them as much empathy as you would another person.

A sociopath will view any sort of ultimatums, emotional pressure and power plays as games or threats.

Do not play mind games with a sociopath. Do not compete with them, don’t try to outsmart them or even psychoanalyze them. Your focus should be on protecting yourself.

Don’t talk about being wrong or right. Sociopaths do not perceive right or wrong. They only understand power, and they want to have power over you.

Is it true they won’t… Read more »

Multitasking might seem like an amazing idea when it comes to your kids' homework and progress in studies. But is it actually?
Read more
Abuse

Optimistic women blindly hope that their toxic relationship will become perfect one day. Optimism makes it difficult for them to leave the relationship.
Read more
wpDiscuz
9
0
Would love your thoughts, please comment.x
()
x
| Reply