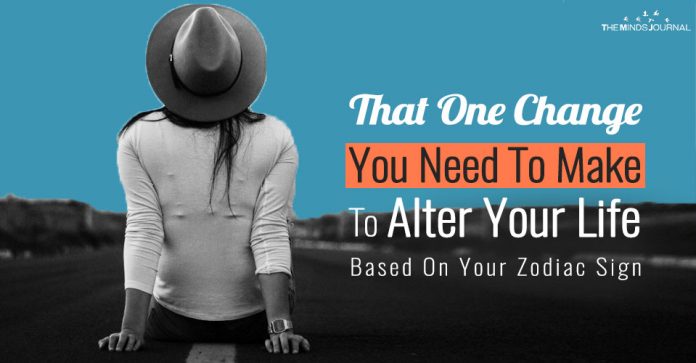 Alter your perception of the life you are leading.

Negativity will drain you. Instead of looking at the glass half empty, try looking at things a little differently and see how it affects your life.

Alter the credit you don’t give yourself enough of.

Pat yourself on the back every once in a while. It’s okay to be proud of who you are and the choices you’ve made. It doesn’t make you pompous or arrogant.

Alter your life by trying to make yourself happy and not everyone else.

It’s important to make yourself happy and not just try and please everyone around you. When you do that what you’ll find is you’ve lost yourself trying to be what everyone else wanted and needed you to be.

Alter the way you think about the past.

Stop being so bitter about the past. You can’t change it. You can only learn from it.

Sometimes it’s scary to admit a place doesn’t work for you. When a plant doesn’t thrive, a gardener doesn’t look at the plant and blame it, instead, they alter the surrounding in which it’ll thrive and grow. People are the same way.

They can deeply understand a side of you that others won’t notice at all.
Read more
Zodiac Signs 'N Secrets

Want to know what you need in a relationship? read this.
Read more
wpDiscuz
0
0
Would love your thoughts, please comment.x
()
x
| Reply